Personal summary : "Painting the land is the best way I know of evoking half forgotten memories or truths. I have long been drawn to places of trauma, be it abandoned post industrial sites,or war zones. My feelings about the physical reality of what is left moves me to paint. I am in a sense a history painter". 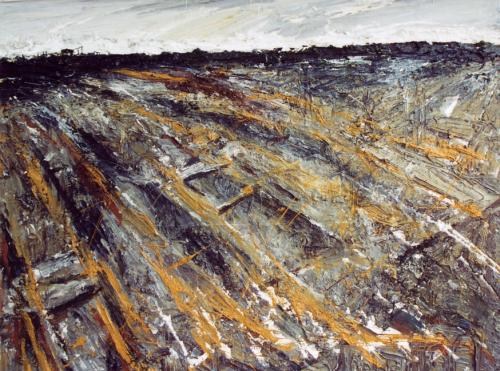 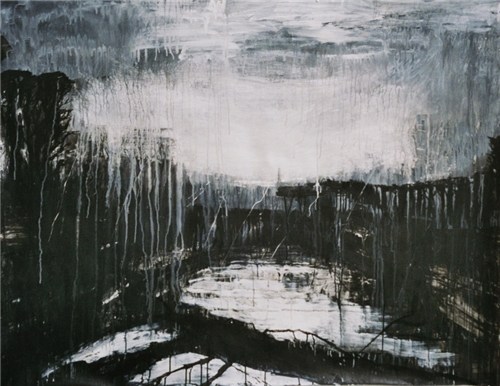 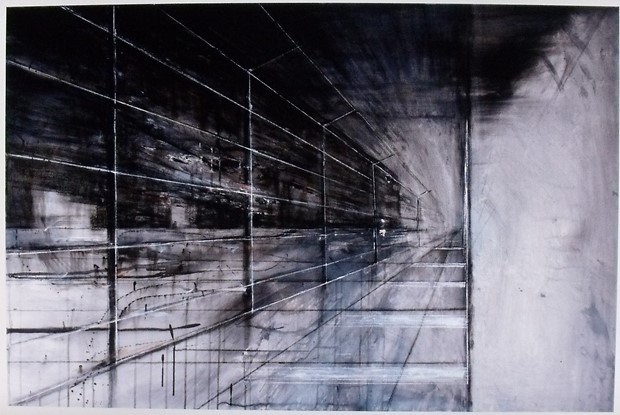 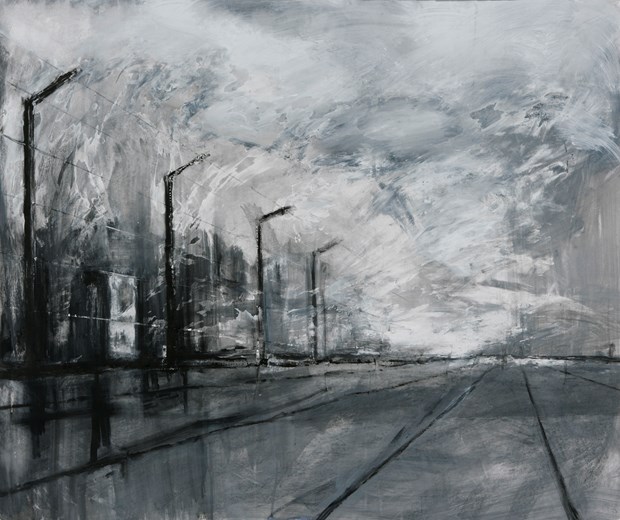 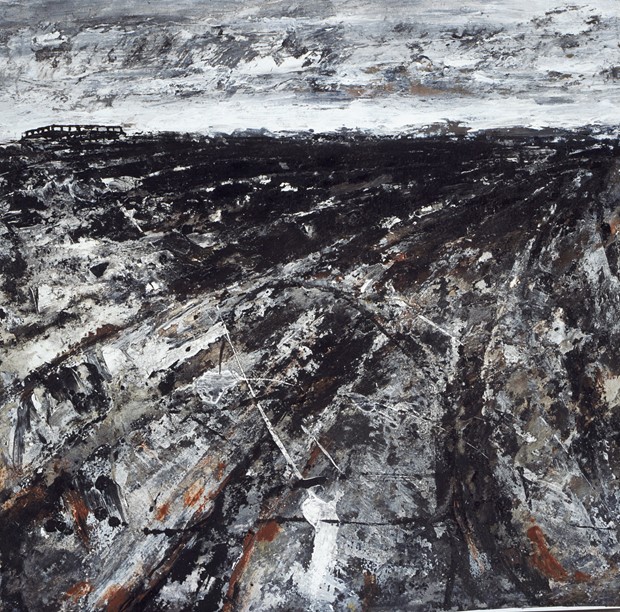 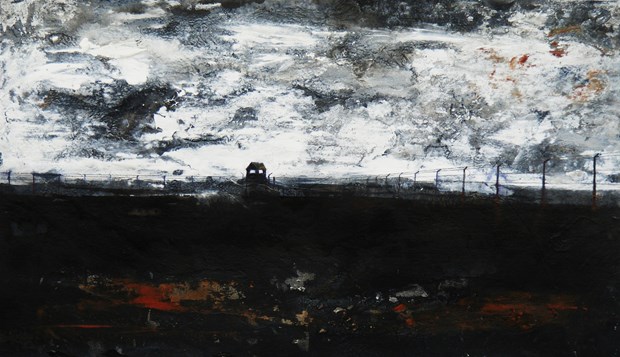 Personal summary : "Painting the land is the best way I know of evoking half forgotten memories or truths. I have long been drawn to places of trauma, be it abandoned post industrial sites,or war zones. My feelings about the physical reality of what is left moves me to paint. I am in a sense a history painter".

Some Reviews of work :

"Phil's art incorporates big events and issues, their awful consequences and our responsibilities for them. His work raises tough questions about what we humans have done, what we have failed to do, what we have looked away from, who we really are, what we should be. This is rare and powerful art which penetrates and can leave its mark on us".

"His work engages with landscape as both a physical place as well as a psychological space.... These works excavate ideas of history and geography, place and time", Phil Nichol, Bayart, 2008.

"Phil Whiting is a painter. His vigorous use of materials- acrylics (in thick striated impasto) inks, charcoal (ground and smeared) applied with brush, knife and 'whatever'- recalls a terrain smarting from the brute force of man's misuse of it. This is not the celebrated picturesque Cornwall we so often see but its dirty, rain-soaked underbelly, a landscape left bereft by voracious mining and haphazard industrial development. Work from Bosnia (his exhibition 'Srebrenica' transfers from the European Parliament Building to the Royal Cornwall Museum in the Spring) is also included - landscapes whose brutal past is etched into their future reminding us of the horrors mankind is capable of creating for itself", Pip Palmer, Galleries magazine, Jan. 2007.

"Predominately black and white, they're built up with thin layers of watery paint that Whiting has splashed, dripped and poured onto the paper using expressive, gestural marks verging on abstraction. Up close, these large paintings are a confusing jumble, as if looking through a mud-spattered window. It's only when you step back, viewing from a distance, that their full power is appreciated. One of the most arresting is 'The Place of Sorrow'. Though the location is not disclosed, its sweeping panoramic view and dramatic sky is incredibly striking. 'Destroyed Muslim Houses Near Srebrenica' is another powerful, psychologically charged work contrasting sharply with the images of Cornwall such as 'Tin Mine Wasteland' or the painting of St Stythians church, its tower just visible in the distance through the drips of paint. Hard-hitting and thought-provoking, this exhibition leaves a lasting impression", David Trigg, Metro, August 2008.

"Phil Whiting has an international reputation for his work based not just on the excellence of its production but also on the uncanny way in which from simple elements of a scene he teases out deeper, darker, emotions that connect with our memories of familiar places and not so familiar events, to render them indelible", Dr Tony Piper, Stuart House Museum, 2009.

Influences: Very early on American Abstract Expressionism was important to him. This was enriched by his discovery of David Bomberg and Frank Auerbach (around 1971) and Paul Nash. In the early 80's he also found affinity with German Neo-Expressionism. He reads Modern History avidly and believes that his generation can provide that essential bridge of knowledge/experience between World War 1 and the uncertainties of today.

Career path: Born London 1948. Some earliest memories were of bomb sites seen from push chair. Grew up in Hull. Studied Art at Newcastle, Portsmouth and Falmouth Colleges of Art. Hitch hiked across Europe to former Yugoslavia in 1968 showing solidarity with the 'Student Movement' and 'Prague Spring' ("probably my one real achievement whilst a student at Portsmouth College of Art"). In 1974 he worked in a psychiatrical hospital near Leicester where he met aged survivors of the Sleeping Sickness Epidemic' which ravaged the West in the early 1920s. He reallocated to Norfolk and inspired by the area's haunting landscape embarked on his career as a landscape painter. In 1977 he met aid workers working for a  Human Rights organisation in Palestine and felt deeply uneasy by the approach of Western powers which seemed little more than adopting the policies of immediate political expediency. Received a supportive letter from Naom Chomsky (with whom he would later profoundly disagree). In 1980 equipped with a sketchbook journal (a format he would from then on adopt for his many travels throughout the world) he travelled the length of the former Yugoslavia just after Tito died in Spring 1980 : "People extremely apprehensive about the future." Later he trekked alone in SW Crete following the Allies evacuation route of 1941 to Paleokhora. In 1981 he travelled around America visiting 19 States and crossed the border into Mexico. Deeply impressed by the absence of any real sense of excavated memory or history especially in the deserts of the S.W. he returned to England determined more than ever to become a history painter in the landscape tradition. He moved to London and in 1985 a girl friend and her 6 year old twin boys were callously gunned down. This traumatic experience made him well qualified to explore such areas as the aftermath and pity of conflict and war - issues that later began to inform much of his work. He reallocated to Cornwall in 1989 and embarked on a series of paintings inspired by Cornwalls post-industrial past. In April 1995 at the height of the Bosnian war and whilst Co-director of a painting school in S.W. France he visited Oradour-sur-Glane with students. So moved with what he saw and disturbed by the genocidal behaviour once again taking place in the heart of Europe he made plans for a major project to visit sites of C20th (and later sadly C21st) trauma throughout Europe and the Middle East (later to include New York) in an attempt to find answers. His Project became known as 'Places of Mourning in the Western World' and was only finally completed in 2019. In 1996 he was elected a member of the Newlyn Society of Artists, becoming acting chairman in 2006. In 2004 his oil painting 'Flanders Field' was  chosen as her favourite by visiting Arts Minister Estelle Morris (exhibition 'Critics Choice' at Newlyn Gallery). The exhibition was recommended in 'The Times' by Rachel Campbell-Johnston. In 2005 he was commissioned to accompany the  N.G.O. 'The Fund for Refugees in Slovenia' to Bosnia to bear witness to the aftermath of genocide as a war artist. This culminated in his solo exhibition 'Srebrenica.Paintings from the Grave' held in the European Parliament Building, Brussels in 2006. Since then he has been invited to give talks and exhibit his work at many institutions including Truro Cathedral and Oxford University, and has been commissioned by organisations such as The Guardian and Amnesty International.

Phil continues to paint and travel extensively in his search for subject matter. In recent years he has embarked on many overland painting expeditions accompanied by his wife Emma travelling through places as diverse as the Balkans and Central Europe, Siberia, Mongolia, China, Nepal, the Middle East and the Arctic Circle.

In 2017 he was elected a Fellow of the Royal Society of Arts.

"Here, I feel, is an artist who takes as a start important historical subjects and events and transmutes and transforms them, in his personal way, into poetical and magnificent paintings", Roman Halter, artist and Holocaust survivor.

2014 - 'Opening the Gates of Hell'. Recent paintings with text to help commemorate the Great War Centenary and it's relationship with conflicts today.Truro Cathedral, Cornwall.

2012 - 'Places of Mourning in the Western World'. Truro Cathedral, Truro.

2019/20 - Invited to participate in 'A Horse's Head in the Frost - a celebration of the Mari Lwyd tradition' Exhibition. Chepstow Museum.

2019 - Invited to participate in the XII Florence Biennale but declined because of lack of funding.

2019 - 'The Spectre of the Real Exhibition Selection'. SEAS Brighton.

2009 - 'Out of Cornwall'. The Royal West of England Acadamy Galleries, Bristol.

1994 - 'In a different light'. The Royal Cornwall Museum, Truro. (reviewed on Kaleidoscope, Radio 4).

2015 - 'Places of Mourning in the Western World', (in conjunction with Freedom From Torture) Iffley Academy, Oxford.

2013 - 'Places of Mourning in the Western World'. The Sir Terry Frost Gallery, The King's School, Worcester.

2010 - 'Gateways to the Heart of Darkness'. Monmouth School, Monmouth, Wales.

2009 - 'Conversations on Land, Memory and the Anxiety of Erasure'. Stuart House Museum, Liskeard.

2009 - 'Places of Mourning in the Western World'. The Contemporary Art Society For Wales., Cardiff University.

2008 - A Leap of Imagination, The Royal Cornwall Museum, Truro.

2008 - The Anxiety of Erasure., The Bayart Gallery, Cardiff.

2006 - The Importance of Srebrenica, The European Parliament, Brussels, The Yehudi Menuhin Space.

2013 - Places of Mourning in the Western World, The King's School, Worcester.

2012 - Srebrenica Revisited, The Fund for Refugees in Slovenia, Srebrenica, Bosnia.

2009 - 'Remembrance, Places of Mourning in the Western World' exhibition, New College, The University of Oxford.

2005 - To bear witness to the aftermath of genocide as a war artist, The Fund for Refugees in Slovenia, Srebrenica, Bosnia.

2016 - Painting 'Old Mine Workings'. The collection of the Penlee House Museum & Art Gallery.

2009 - Painting 'A Minions Elegy'. The collection of The Stuart House Museum. Cornwall.

2008 - Painting 'The Place of the Missing no.2'. The collection of the Royal Cornwall Museum.

1994 - Painting 'Geevor Tin Mine 2'. The collection of The Royal Cornwal Museum.

2008 - The Painting 'Place of the Missing no.1'. The collection of Truro Cathedral.

2005 - Further corporate purchases include 2 paintings purchased by Thompson's Galleries Ltd London, and 1 painting purchased through auction by the Belgrave Gallery St Ives in 2013.

Plus work held in over 250 private collections both at home and abroad including that of the former Chancellor of the Exchequer George Osborne.

2009 - The Contemporary Art Society of Wales

2005 - The Fund for Refugees in Slovenia

2011 - 'Srebrenica. A Cry from the Grave'. Music by John Guy Storer and paintings by Phil Whiting. Produced by Engineers of the Imagination. You Tube.

2008 - 'The Harrowing of Hell'.Music composed by Russell Pascoe and performed by 'Confitemini'. Inspired by Phil Whiting's paintings., Truro Cathedral., Truro. (Available on CD.)

2008 - Invited to read the Third Lesson of Festival of Nine Lessons and Carols, Truro Cathedral,

2021 - Phil Whiting's prose poem 'Mad Dogs and an Englishman', his book review of 'One Word of Truth' and his painting 'Wild Swans at Otmoor' published in the FOSM Annual Report, 2021.

* Some of the media attention on arriving home on 14th November 2017 after completing the twelve thousand mile eight week overland journey part of my project 'Why This Here Now?'

2012 - 'Places of Mourning in the Western World' exhibition.Truro Cathedral Newsletter.

2012 - Political painter who keeps alive the memory of the horrors of war. The Cornishman, March 1st 2012.

2010 - BOOK: 'Called by Mind and Spirit;Crossing the Borderlands of Childhood' - by Gavin Knight and Joanna Knight.

2009 - 'Father and Son Reunion at the Rainyday' by Frank Ruhrmund,The Cornishman.

2009 - 'Remembrance'. An article with images written by Phil Whiting and published in the Truro Cathedral Newsletter.

2007 - BOOK : Cornwall and the Isle of Scilly. Oil Paintings in Public Collections.

1999 - Paintings by Phil Whiting : The Last Ten Years by Frank Ruhrmund, The Cornishman.

2016- To research further material for 'Places of Mourning in the Western World' project completed a short course titled ''Terrorism in the Contemporary World' at Dept.For Continuing Education, Oxford University.

2018 -  'Exploring the Landcape - Where Geology and Art Meet'. A talk given by Francis Howie which among other art works includes Phil Whiting's painting 'Geevor Mine. Winter 1991 No2'. Penlee Museum and Art Gallery, Penzance,19th February.

2017 - Blog : www.royalcornwallmuseum.org.uk  'Place of the Missing' by Phil Whiting.

2016 - 'A Magpie Looks at Velasquez, Picasso, and an Icon or Two'. A talk given by Philip Lambert which incudes two paintings on the terrible events of Sarajevo and the Srebrenica genocide in 1995 by Phil Whiting. Wed Jan 20 at 11am. Kalamitu Arts Group, Raki Bar, Vamos, Chania, Greece.

2005 - elected member of The Newlyn Art Gallery and Exchange Gallery Council of Management.

Phil Whiting is married and has four grown up children and seven grandchildren.