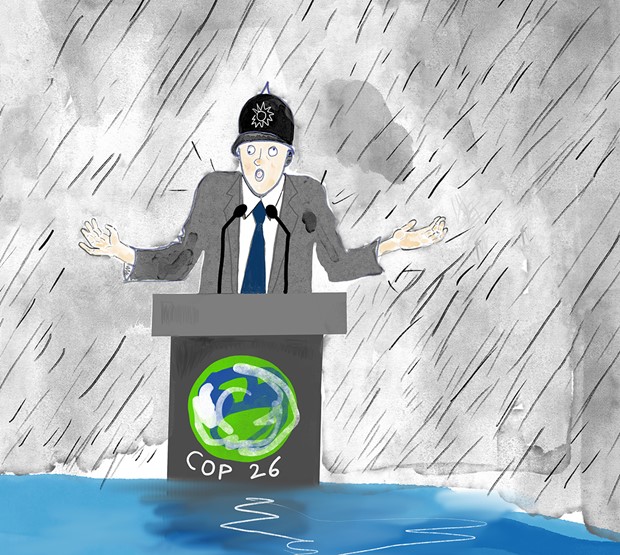 My latest (Keystone) COP26 image influenced by the The Telegraph article written by Allison Pearson...

'It has swiftly become apparent that it’s we who must make sacrifices to ‘offset’ the frictionless pleasures of the global elite
When he wasn't sleeping on the job, Joe Biden seemed to have forgotten that he had just been imploring Saudi Arabia and Opec to produce more oil
Ihave one small objection to Cop26. They forgot to put the word Keystone before it. Proceedings at the climate summit in Glasgow got off to a disastrously slapstick start. In no particular order:
A fallen tree on the West Coast main line caused chaos, preventing delegates travelling from London. Channel 4’s Jon Snow tweeted that this was proof we should take climate change seriously. Because no tree in England ever fell over in bad weather before the Industrial Revolution. A bystander suggested the newsreader was particularly exercised by global warming because, if it wasn’t halted, he’d be known as Jon Water.
Around 400 private jets landed at Glasgow airport, carrying world leaders and billionaire businessmen,
which did slightly undermine the summit’s key message that we need to reduce our carbon footprint in order to reach net zero by 2050. It swiftly became apparent that by “we” they mean poor people, who must make sacrifices in order to “offset” the uninterrupted, frictionless pleasures of the global elite.'