Our Artist of the Month for May 2020 is Pandora Vaughan. We talk to her about her artistic practice, influences and upcoming projects.

Tell us a bit about yourself and your practice, how would you describe the work that you do?

Well I was born in London & have lived here 25 yrs, but grew up in Canada - so feel pretty split culturally. Probably my core interests from way back are structural and spatial and related to constant re-settling - I’ve had more than 30 homes. Also I’ve worked in the music industry since I was 16 so that’s often linked to the things I do and like.

Art wise things have always circled around inhabited space, politics, designed environments, constraints on freedom. I work alone but also collaborate often. Always led by place and atmosphere, followed by materials. Sometimes the materials create the atmosphere and vice versa. I’ve always liked fragmented narratives and the politics of whatever I am working with. Somehow text creeps in a lot. I have a thing for 16th century emblem writing and its simplistic moralising. 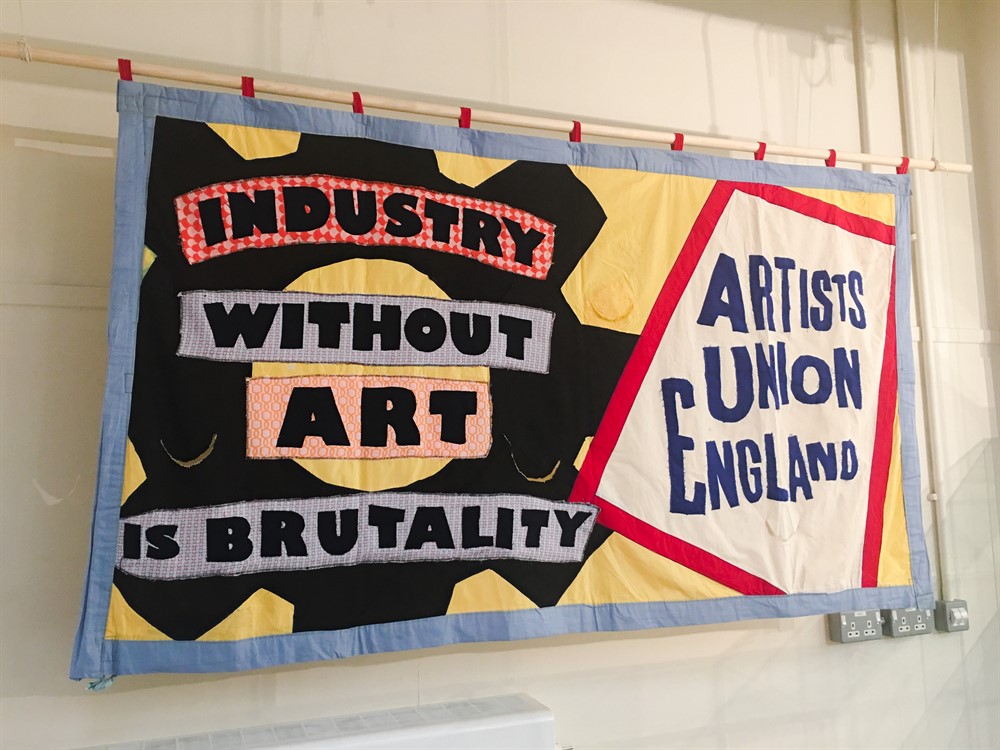 Some of your work involves embroidery as a process, I wondered how this relates to your thoughts on space?

Stitching is pretty constrained and solitary - it suits my need to be alone and achieve something I can control - unlike a lot of other larger work. My relationship to it is love/hate. I don’t like how the technique is always the first thing people comment on - so I take long breaks from it. The Out of Space project - a series of prison architectural plans, was different. The method really fit with the subject and I collaborated with an ex-inmate, Regi Mentle, so that brought it out of my sole domain. He wrote about time, space and confinement which all relate to embroidery as well as incarceration. 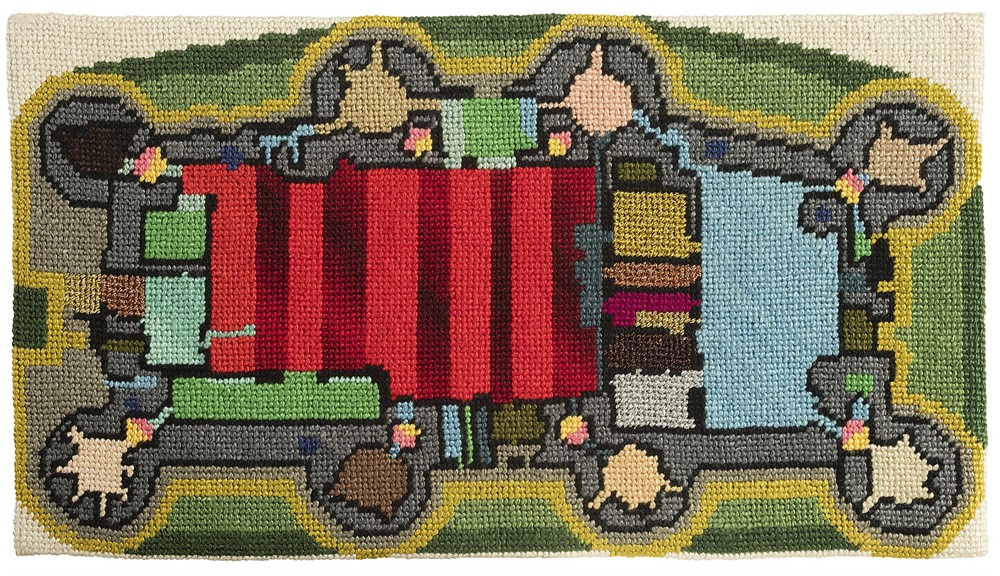 Confinement and regulated space is a prominent subject in your work. Has our new isolated living situation influenced how you think about these subjects?

God yes, of course. It’s all front & centre. I’ve had a lot of reflection about how depressive or negative my work is. With everyone going through that experience and sharing it online I’ve had to think about whether it’s relevant to keep on about it or to discover different routes in my work that I can follow. I think a lot about the loaded symbolism in every architectural feature (windows, walls, thresholds etc), about forced reflection and the exposure of the self that imprisonment brings. I think about the boundaries of institutions. I’m kind of desperate to look at the spaces between the cells again - the landscapes. I just finally visited Eastern State Penitentiary in Philadelphia last month as the virus was starting to change everything - I left thinking about weeds & enclosed outside spaces more than ever. I've done works on exercise yards but not on what grows there. Thats a whole other set of concentric interests to put together. 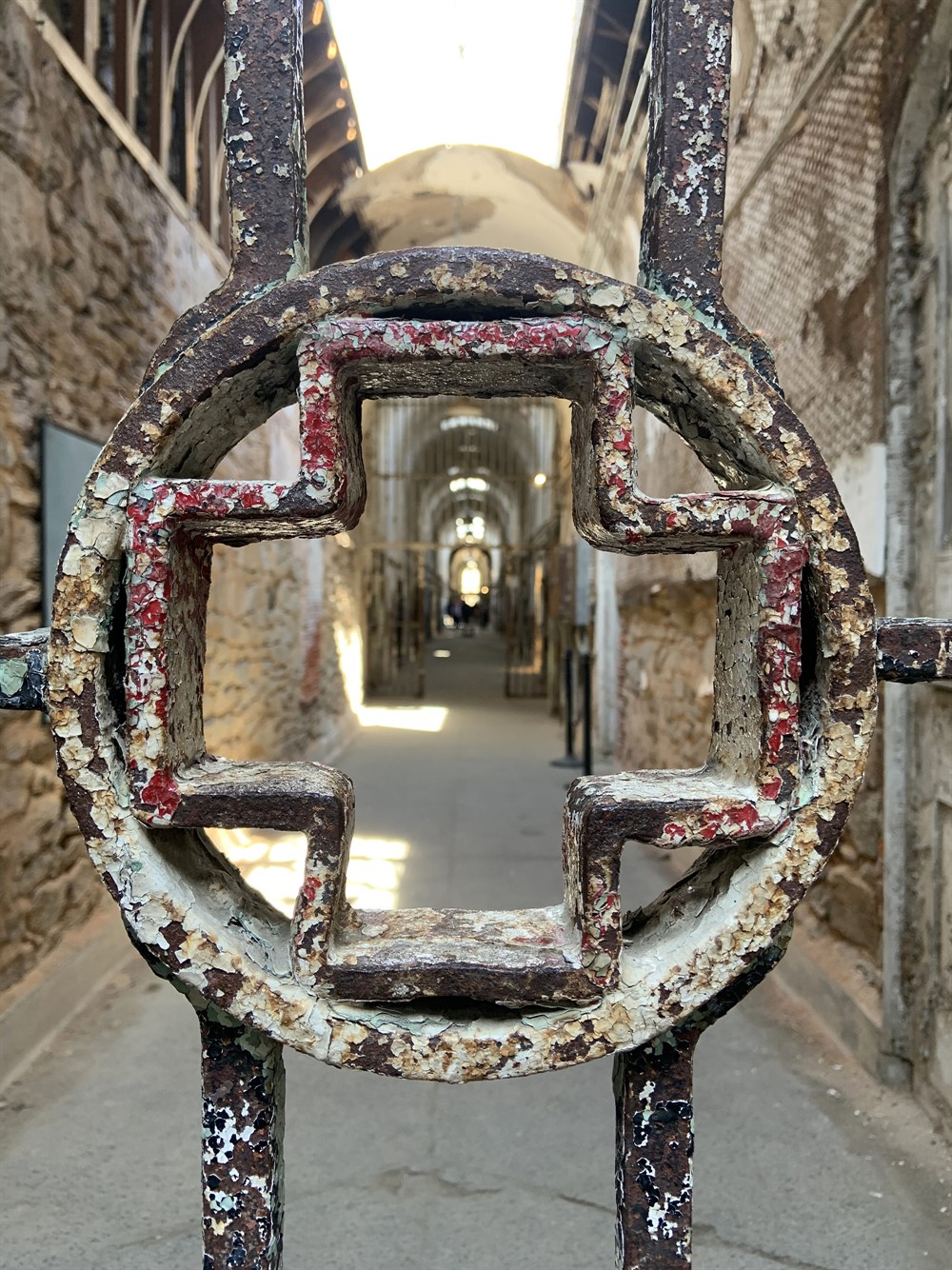 As well as 'Fine Art', you’ve also studied an MA in 'Art in Architecture' and another in 'Landscape Architecture'. I wondered how this evolution of formalised training has affected the development of your practice?

I had been doing painting and photography and small metalwork. I wanted a better technical understanding of architectural spaces and to work larger. I went to work in the built environment industry and it mostly gave me an education on the politics of land use and made me more interested in subverting accepted practice. It did lead to my collaborating with an architect - Huw Owen - for the past 17 years though. We work as V&O on community design projects, mainly in Wales.

I think these areas of interest all relate to each other, or I force them to in my work. Somehow I try to bring the intimate out into the landscape. 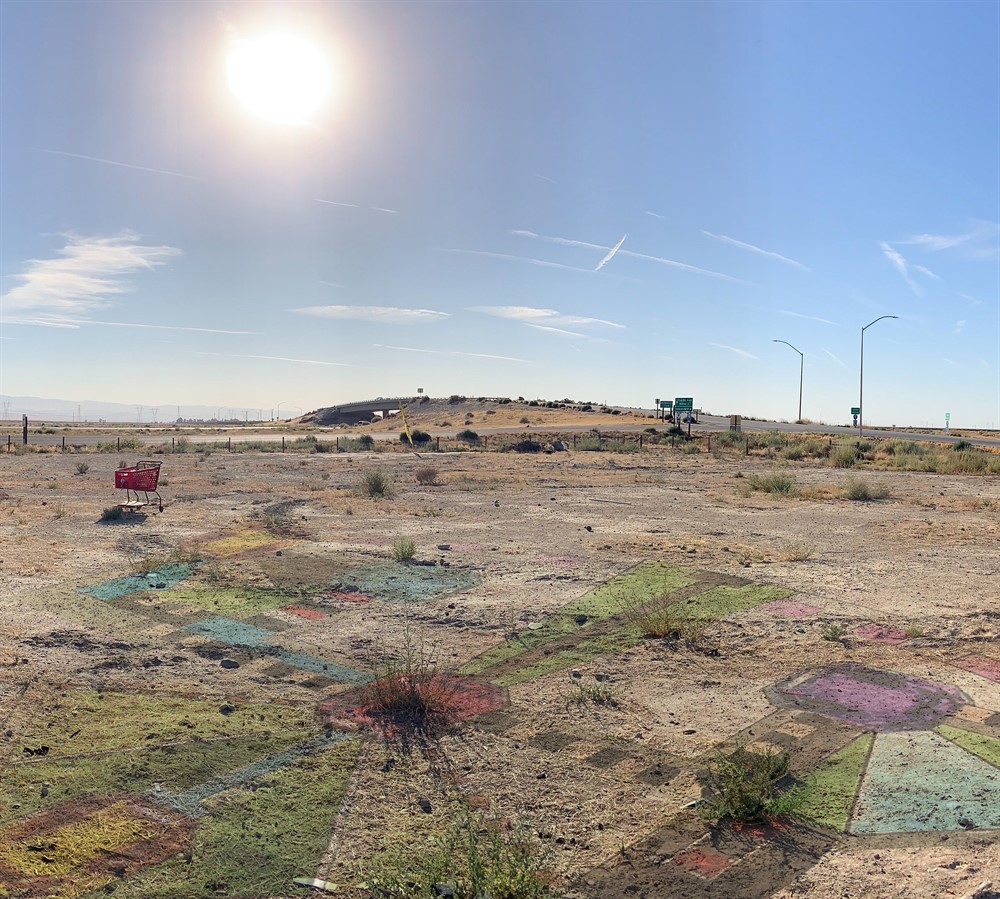 You also co-founded the artist group Grrrr! Can you tell us more about this project and how collaboration fits in with your own art-making?

Sian Pattenden & I started it off as a community art project in an empty shop in Kentish Town. We wanted to do something local and accessible and share the platform with other artists. The two of us have wildly different takes on art but it made sense to pull something together that linked to music because we both have that background. We did a group show, which was surprisingly popular and opened a shop selling small works. I learned a lot about the strength of two women to get things moving, though we had a lot of help from Terry Hall and others. Also about the power that journalists wield in London. We did another pop up show with machine themed events, a festival and a show in Wakefield at the Arthouse. Lots of artists have been involved throughout - esp Cathy Ward, Keeler Tornero & Tessa Norton. It was great fun but hard to do it all unpaid so we’re taking a break.

I am a serial collaborator. I’ve done projects with Sian, with Huw in Wales, Gee Vaucher, Gillian McCain, Marisa Carnesky, others. It keeps fresh perspectives on ideas and keeps misanthropy from creeping in. I am also part of Peer Social - an artists peer group set up to support each other’s practices. That has worked really well for 3 years. We’ve been curtailed by this lockdown but are being hosted by Raven Row to hold events again once it ends, which will open it up and invite more artists to discussions and workshops. 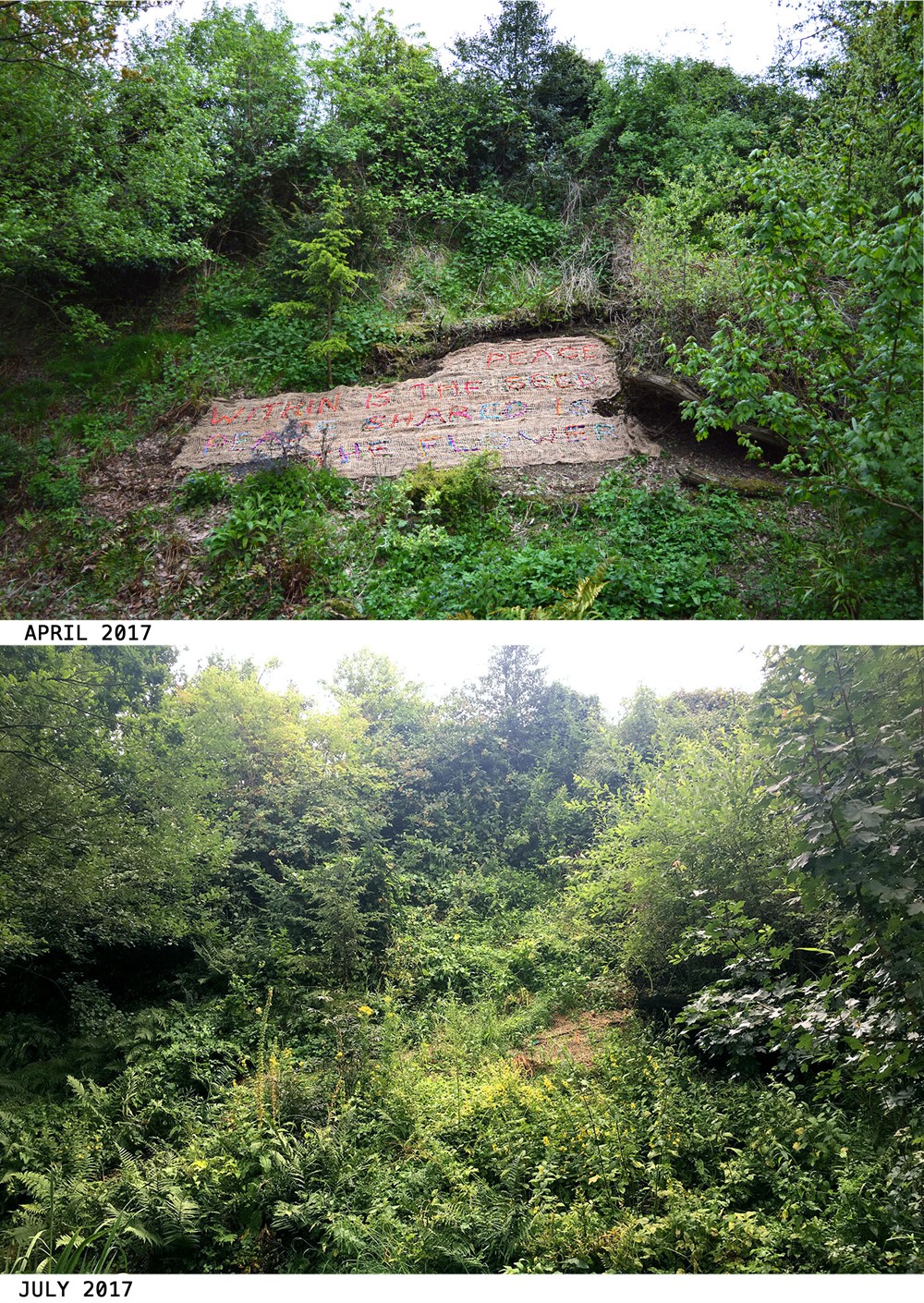 Which artists working at the moment do you admire?

Well there are lots, mostly working with political & environmental themes using an aesthetic approach to suggest alternatives. Projects like The Center for Land Use Interpretation, BBM (Beobachter der Bediener von Maschinen), The Mobile Disruptive Architecture project and Sentiment Architectures.  Also individuals doing this: Andrea Zittel, Lawrence Abu Hamdan, Theaster Gates. I’ve also always been a big fan of the stuff that came out of the late 70s early 80s via Mike Kelley & David Askevold. All that vernacular material culture work - the ‘difficult conceptualists’. The mixing of music and art subcultures. The print / publishing and craft based work that evolved out of that is where I feel the most at home. I really like Caroline Achaintre and Matt Borruso’s Visible Publications. And in the UK I like that we are a bit more playful - works about collective psychology via artists like Mark Titchner & Martin Creed. 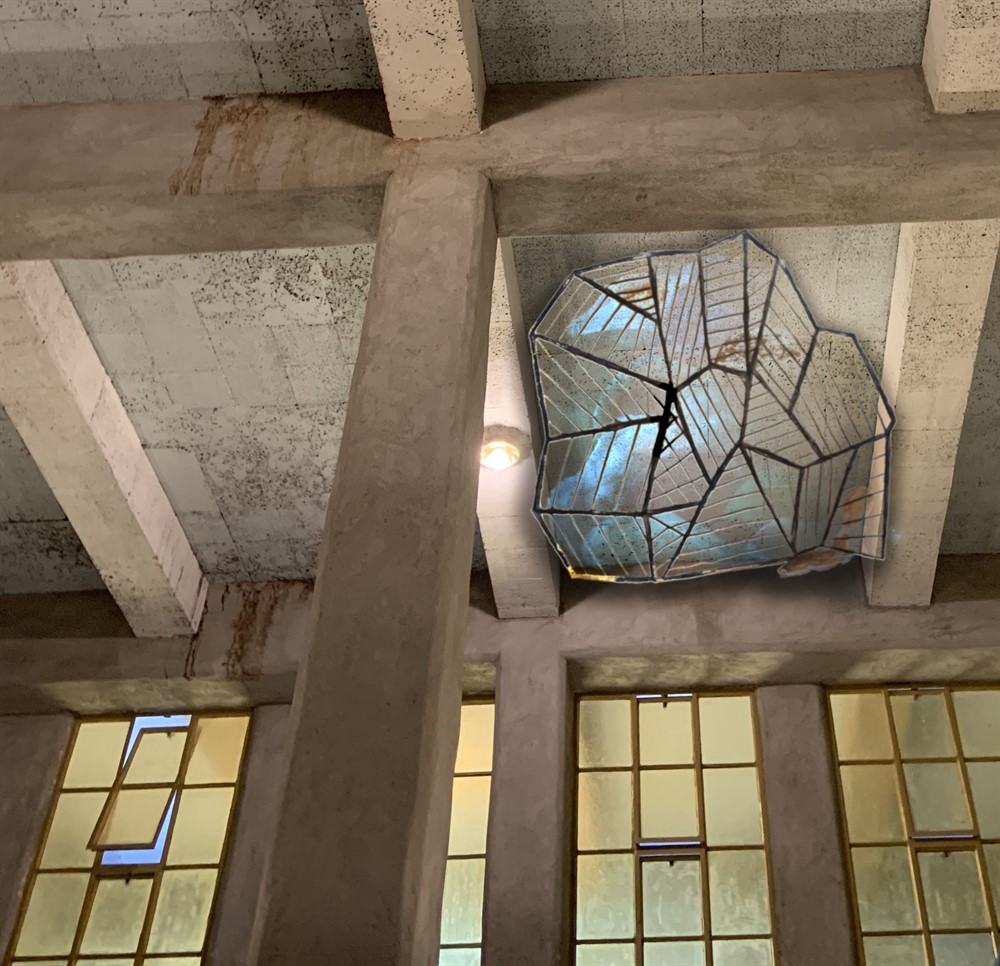 What do you have coming up?

Right now I'm doing some graphics for the Global Disinformation Index. With the lockdown and social distancing it’s hard to say what plans will go ahead but I have a community print project in Edinburgh to start, around contested space and souvenirs. Also a heritage street project in Penarth (with Huw) to finish. I’m working on a series of soft sculptures and images based on transient colonies that I hope to show eventually. And I’m also slowly writing a phd proposal on Coercive Landscapes.