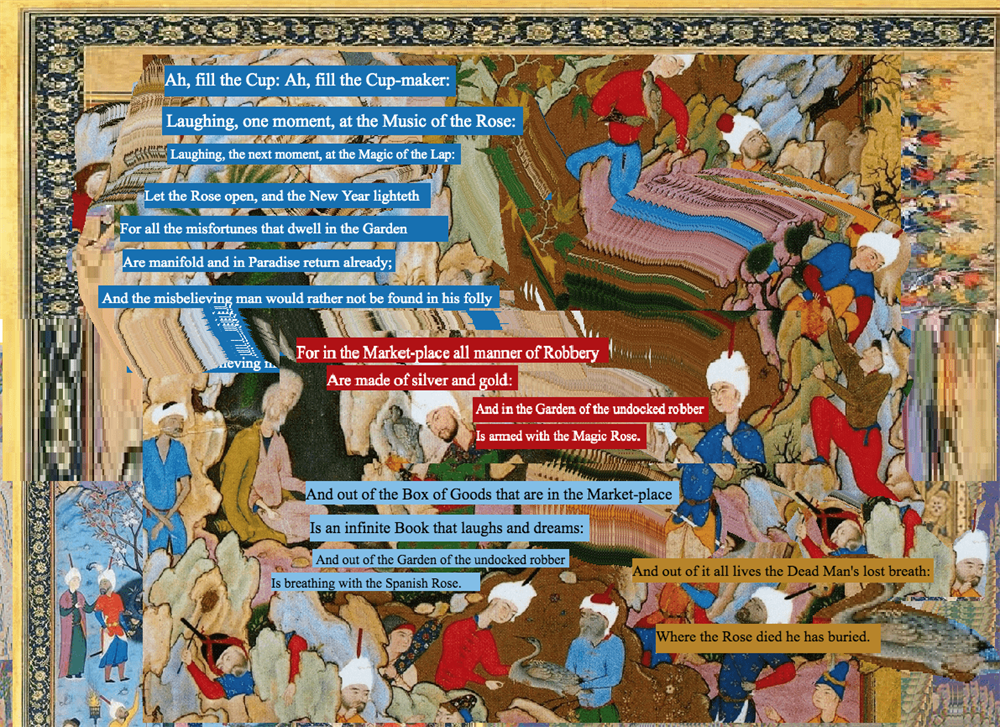 Digital Mysticism (DM) is a collaboration between myself, nil00 and Kiara Mohamed. The project was born from an excitable, in-depth conversation about mysticism, conducted during lockdown over iMessage. We both love mystics from all around the world and struggle to limit ourselves to a single cultural expression of the human experience with the divine. I told Kiara about my idea to make a mysticism bot – to train the same bot that is responsible for Dril Bot (@dril_gpt2) on Twitter with mystical texts from around the world, and to see what it comes out with. I wanted to see if the machine could find commonality within such a complex and often fraught topic. A topic which has been the wellspring, or at least a crucial component of global conflict, for as long as humanity can remember. Kiara came up with the ingenious idea of turning the output into an SMS bot that people can text and receive an AI-generator aphorism from, and calling it DM – and so the collaboration was born.

This work is in the same vein as my previous piece, The Magic Tree, an online game where people can anonymously upload photos to transform an artwork with Neural Style Transfer. It uses open-source code to facilitate mass collaboration online and to produce something greater than the sum of its parts. The Magic Tree has generated 463 new artworks to date.

My nerdy interest in digital mysticism and working paradoxically with artificial intelligence to reach for human connection and the divine came together with Kiara’s incredibly warm, human approach to making art. We’re really excited to deliver this project so that people can interact with it and hopefully get some comfort or guidance from it. As an Iranian, I often using the poetry of Hafez as a method of divination – this is a centuries-old practice embedded within my culture; Hafez’s book of poems sits alongside the Quran in significance and it’s really exciting to pay homage to that in a new way.

Kiara and I set about compiling a list of our favourite mystical texts (and a few poems) for the bot to be trained with, which we are continuously adding to. This is the list so far:

The Marriage of Heaven and Hell by William Blake

For Grace, After a Party/ Animals/ Sharing a Coke With You by Frank O’Hara

Unburnable the Cold is Flooding Our Lives by Kaveh Akbar

What Resembles the Grave but Isn’t by Anne Boyer 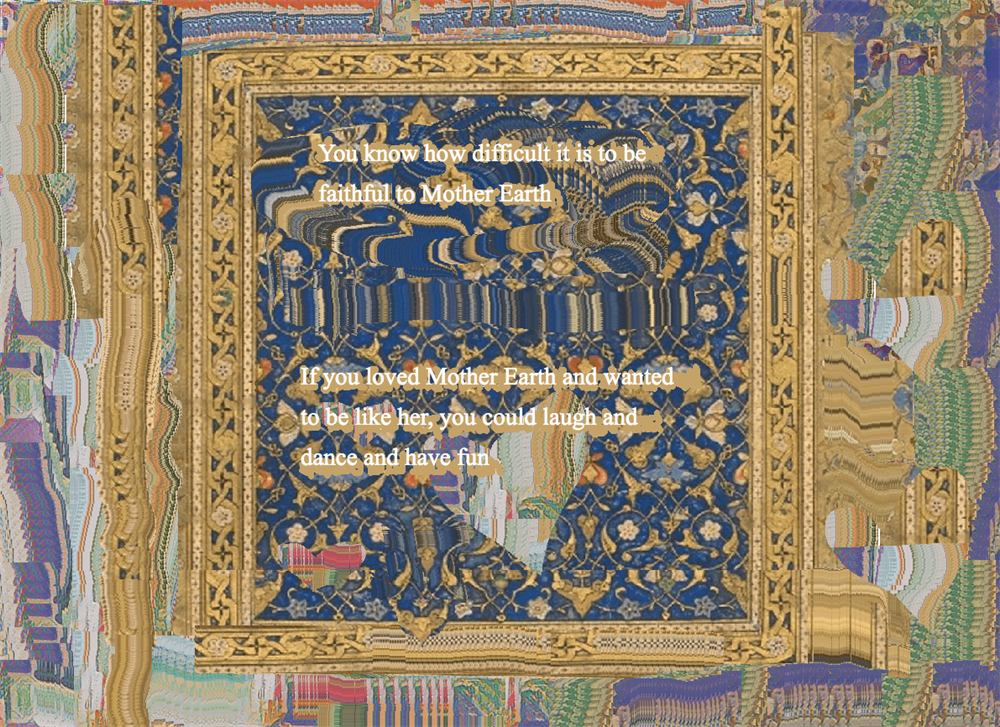 The model we are using for the project is an open-source text bot by Open-AI, called GPT2. I followed this tutorial to make it happen.

The first time I trained it on these texts, plus the entire King James Version of the Bible and the entire Baghavad Gita. It came out with some good stuff, for example:

Some people are offended because they think that I have to do with Christianity.

I know that there is a difference between man and God, but I have not tried to prove it.

I seek to perform the function of a god.

I do not seek to invent a new religion.

I am not trying to prove anything.

What I do want to do is to make the world where I am now situated as it was before the Empire existed.

But it was mostly coming out with things like:

The LORD hath given me an inheritance in my father’s house, in that I have walked in the way of evil, and not as my father had made me to do.

This is the LORD’s word.

The LORD hath given me an inheritance in my father’s house, in that I have walked in the way of evil, and not as my father had made me to do.

The word which came out of the mouth of Samael, saying,

This felt way too biblical and not mystical enough. So I took out the Bible and the Baghavad Gita and just kept Ecclesiastes and the passage of Ezekiel where he describes seeing a vision of angels. The output after that was far more poetic and mystical. Here’s a link to everything the model has generated so far.

At this point I also added in the Little Prince, which I feel qualifies as a mystical text, and a few more poems. Now it is generating some really beautiful things. Some of my favourites:

PURIFICATION WILL FILL THE VOID WHERE IT IS LEFT READING

LOVE WITHOUT A PURIFICATION IS TO READ LATER

LOVE WITHOUT A PURIFICATION IS TO READ TO CERTAINTY

So easy it is to be effeminate and vain

If you loved Mother Earth and wanted to be like her, you could laugh and dance and have fun

Laughing, one moment, at the Music of the Rose:

Laughing, the next moment, at the Magic of the Lap:

Let the Rose open, and the New Year lighteth

The Rose that blows from it forget:

For all the misfortunes that dwell in the Garden

Are manifold and in Paradise return already;

And the misbelieving man would rather not be found

For in the Market-place all manner of Robbery

Are made of silver and gold:

And in the Garden of the undocked robber

Is armed with the Magic Rose.

For in the Market-place all manner of Robbery

Are made of silver and gold:

And in the Garden of the undocked robber

Is armed with the Magic Rose.

Is an infinite Book that laughs and dreams:

And out of the Garden of the undocked robber

Is breathing with the Spanish Rose.

And out of it all lives the Dead Man's lost breath:

Where the Rose died he has buried.

The next step for us, alongside continuing to add mystical texts and retraining the bot, is to turn the output into an SMS bot. This will be the really exciting part where we can start to engage the public. 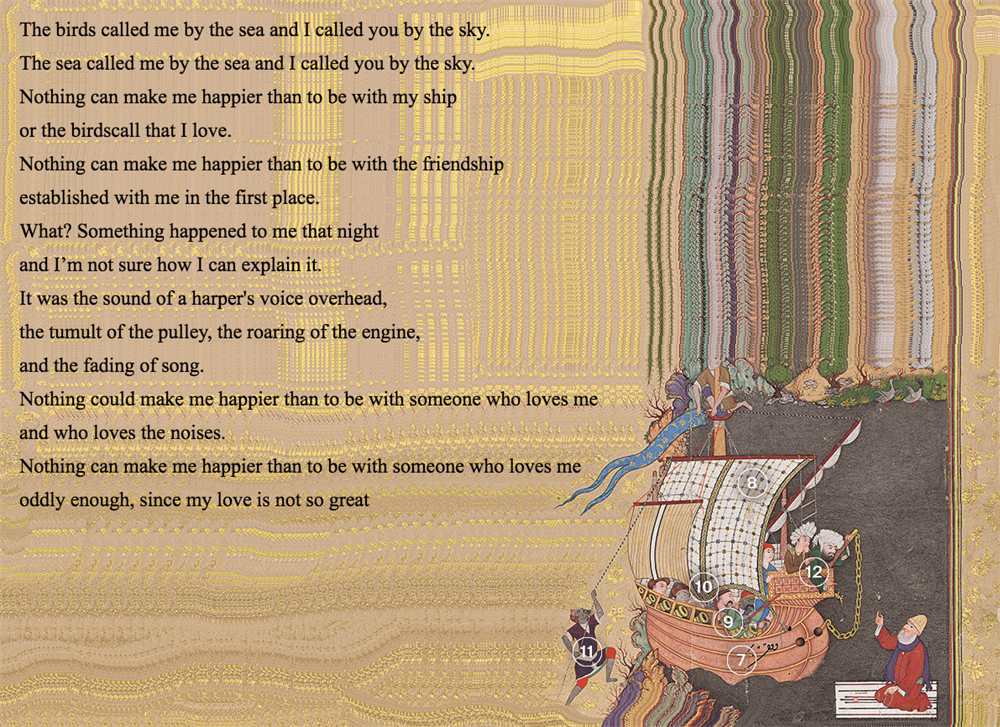 The bot has generated a new text that I really enjoyed and feel that it's special and beautiful. I find it difficult to believe that this is a text created by a robot because there is so much human in it. My favourite new text is:

The journey from the cave to the sea, from the roaring of the sea.

A valley made of thick stones.

The valley filled with water.

I really love how it's got a lyrical sense to it. It feels like old, lost poetry. The next step is to take all of this text and create an sms bot that will either generate new text out of this aggregate or send what is already recreated. These pieces of writing sound like texts from my project Letters to my Sisters, created back in 2018. This project was an interactive and performance art piece inviting women from all walks of life to take a hand written letter by me, sealed with wax and decorated with pieces of flowers, plants and leaves. Each letter contained something written with the aim to comfort, encourage and spread love to the woman who opens it. Letters to My Sisters embodied impulse sincerity and this project, Digital Mysticism is an extension of that.

I am really excited about this project and where to take it next. We are currently adding Rumi poetry to see how that influences and changes our texts. The idea that words and sentences can continue to change and create something completely new is a physical manifestation of our ever evolving relationship with people around us.