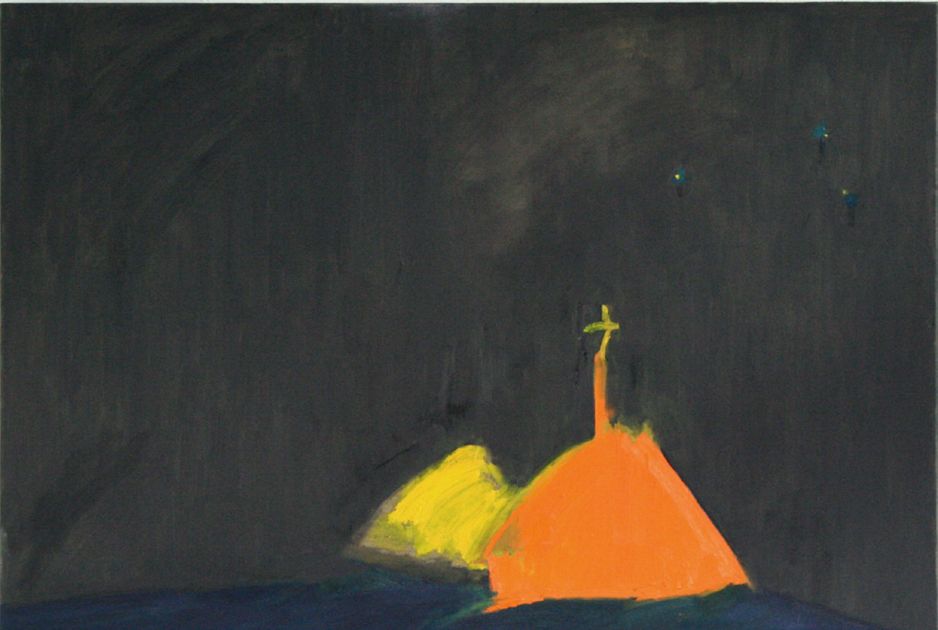 Simon Olding, Director of the Crafts Study Centre, University for the Creative Arts, reviews the work of Dorset-based painter and printmaker, Ursula Leach.

On the straight A road from Salisbury to Dorchester there is a War memorial on a turning to Blandford Camp. Roughly opposite, amongst the drone of cars and the turmoil of the occasional Army helicopter, sit two unrelated disruptions of the field pattern.

A rusted container, brick red against acid green grass, veers up to the sky, a cog wheel now uselessly fixed to its side. It sits on a grassy knoll: abandoned, littoral. Within a stone’s throw is Pimperne Long Barrow, a Neolithic burial mound. These two symbols of archaeology sit in tension together. However, the modern is much more likely to make an appearance in Ursula Leach’s art.

This art exploits the idea of working the land to the full: polemically as well as romantically. She is the author of pastoral loss, and her work is partly a lament for those farming methods that scar, rather than nurture, the Dorset landscape that lies around her house in Cranborne. But there are also moments when nature fights back, at the corners and edges of the worked land or in the grace of a beech copse. She paints what is close to her: figuratively as well as practically. Hers is, she says, the art of ‘the nearby’.

Leach is a commentator on the changed, the wrenched and the unnaturally- forced parts of Cranborne Chase, where most interventions are callous at best and destructive at worst. She sees what is imposed or marginalised. She will set a building ‘whose uses are obscure’ into this landscape and these hard structures (metal rather than stone) are placed with the same angular edges as the corralled and vast fields: spectators to what was once land tilled at a human scale. Her work is literal as well as symbolic, giving voice to what has been lost as well as what is seen. It indicates how ‘the land needs benign husbandry’.

She describes what she sees with a sometimes resonant and singing colour, using super-intense pinks or greens. Colour has the force of a chromatic fugue. Growth and natural energies are constrained to the edge: the untended ‘laybys’ of the farmer’s tracks, unkempt, unsprayed places. These are Leach’s Edgelands, the territory between the cultivated field and managed hedge so well described in Michael Symmons Roberts’s and Paul Farley’s recent book. Blocks of buildings or pathways are discordant elements in Leach’s work: intruding at harsh irregular angles into the painting, they set it in tension. These elements have the force of an angry stab. Sometimes the mood of the painting is more forgiving and gentler, as if swayed by a summer breeze.

Leach has also worked outside this highly specific local domain. There is a warm Mediterranean heat imbued in paintings made in France. In ‘Celtic Cross’ (2012) abandoned church gables are enveloped by a deep, indigo blue-black Cornish night sky, with the textured surface giving a depth and presence both to the painting and its companion print. There are occasions, too, when Leach will see the natural energy within a tree or a pair of trees. In these more lyrical paintings, she finds a harmony of image and a softer, luminous palette.

Many artists have depicted Cranborne Chase, from Henry Lamb to John Piper, and in the present day Ian McKeever and Brian Graham (as Vivienne Light has demonstrated in Circles and Tangents: Art in the shadow of Cranborne Chase). Few if any have given a few square miles of arable land, once royal hunting grounds, such a forensic analysis. Leach has found variety and a compelling, magnetic cause by her walking over, sketching and photography of this close-to- home landscape. Its tribulations as well as its poetic edges have transfixed her. She is also a highly accomplished printmaker, and will often rework an image into a carborundum print (more rarely into a screenprint).

Ursula Leach now seeks to make the most essential picture possible, stripping its composition to the sparest of abstract shapes, and illuminating the edges with more complex marks and patterns. This is an art of observation and not of tract. The ‘formal issues of image making’ are always her primary concern.

Leach has works represented in many collections, including the Ashmolean Museum, The Royal Hospital NHS Trust, Kirklees Museums, The House of Lords and The Creasy Collection. In 2009, she was awarded the Intaglio Printmaking Prize, and was a prize winner in the Dorchester Open.

Upcoming exhibitions and events include an illustrated talk at Ochre Print Studio, Guildford; a group print exhibition at Hilton Fine Art, Bath; an exhibition at Highgate Contemporary Art, London for the launch of Brian Rice’s Catalogue Raisonne (with Brian Rice and Tony Martin) and a solo exhibition at The Art Stable (Kelly Ross Fine Art) Blandford, Dorset, with a catalogue introduction written by Andrew Lambirth.

Professor Simon Olding is Director of the Crafts Study Centre, University for the Creative Arts, Farnham. Previous posts include Head of Arts and Museums, Bournemouth Borough Council and Director of Policy and Research , Heritage Lottery Fund.

He writes about modern and contemporary craft and the visual arts with a particular interest in makers located in South West England, such as The Etchings of Bernard Leach, The Art of R. J. Lloyd and (co author with Vivienne Light) Peter Thursby and Martyn Brewster: prints 1975-2007.

He is a Trustee of the Leach Pottery and Unravelled Arts, and President of Walford Mill Craft Centre.