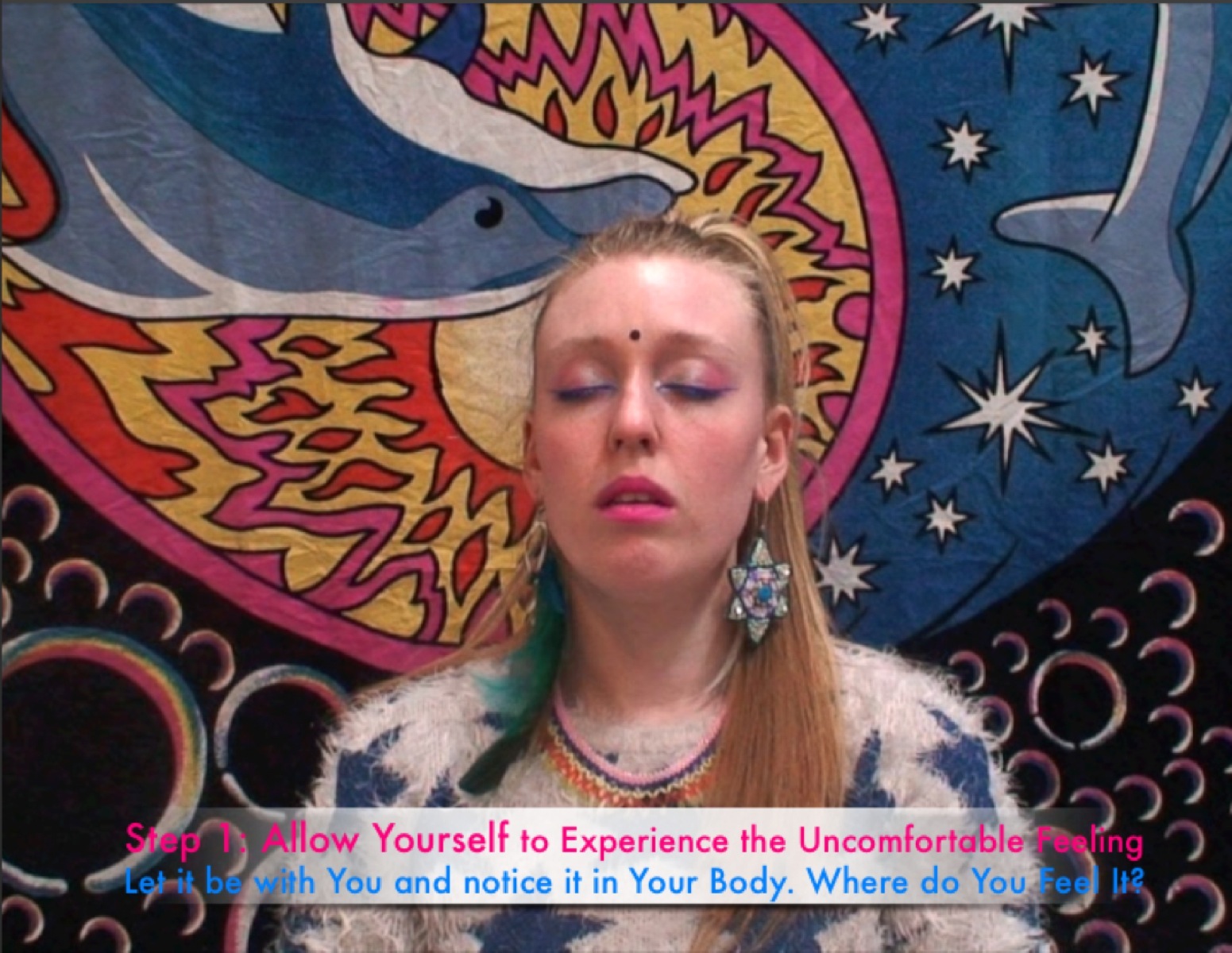 Sophiel Aurora (aka Sophie Lisa Beresford) dances. She dances for herself. And for us. She is a disarming dancer. She jumps, stomps, whirls, pirouettes, arches and bounces in front of a still camera to fast, thumping Makina techno.

Three dances – ‘Bounce’, ‘Dance in Dundee’ and ‘You Got The Love’, all 2010 – present Aurora dancing in three different rooms. ‘Bounce’ shows Aurora in what looks like her bedroom, dancing in front of a wardrobe, wearing tracksuit bottoms and a bright pink Nike Crop top, white Reebok Classics, hair scraped back in a high ponytail, baring her midriff and pierced belly button. Her arms sway and circle around her upper body and head hypnotically; part stylised Vogue, part aerobics, and part tribal dance. Forty-five seconds later, she walks to the camera, winks, grins and turns it off. The resulting video is a familiar scene in the YouTube age: a young woman dancing in her bedroom for an audience on the other side of the camera. The other two videos in this series are similar in their making: ‘Dance in Dundee’ depicts Aurora in a kitchen, dancing, with a pink tracksuit top and cat ears on, and ‘You Got The Love’ shows Aurora revel in her movement, grinning and euphoric.

These works are highly enjoyable and made me grin too. But in terms of art, performance, video and the Internet, where do they sit? How ’authentic‘ is the performance in them, or how ’staged‘? What does ’authenticity‘ even mean today? 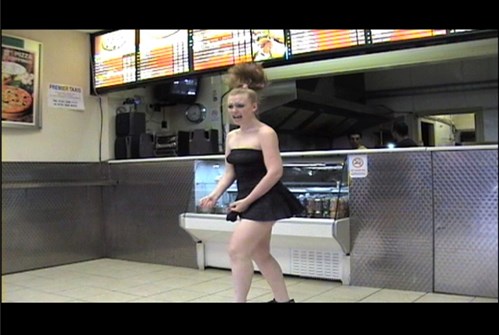 Authenticity is a word I struggle with when used in relation to performance in particular. It often comes up in relation to early Body Art, by the likes of Marina Abramović and Gina Pane, and is used to connote the ’reality‘ of the pain and suffering of the (supposedly transcendental) experience these bodies are undergoing, something that makes them truly alive. Yet this was highly staged stuff. Bearing this in mind, is Aurora addressing today’s notion of authenticity via performance? The ’real‘ selves that are presented every day in the virtual, digital world are also always performed. The ’room tours’, ’hauls’ and make-up Vlogs produced by teenage girls give us windows into ’normal’ lives - yet what was formerly private now is staged, watched by an audience of millions, using the Internet as an extended form of ’self’. In Beresford’s works, what is ’real‘ and ’performed’ is indecipherable.

In ‘My American Travels in Craft’, 2011, Aurora's body is not present, but her voice is. On a black screen, a slow slide-show of subtitles flows, telling the story of Aurora's road trip in the U.S.A with her former husband, beginning: “In America I learned that the open road was more suitable and free flowing than being designated to a place”, and going on to explain, “I entered a native sense of mind like I do :)”.

The story is peppered with spiritual references and emoticon smileys as she tells how she has discovered beads, which to her are ’a tiny holder of the spirit‘ and as jewellery live their lives with you. What this and the videos discussed earlier have in common is a form of address that seeks to transform experience into something euphoric and spiritual.” You are left wondering, ’is this for real?’ 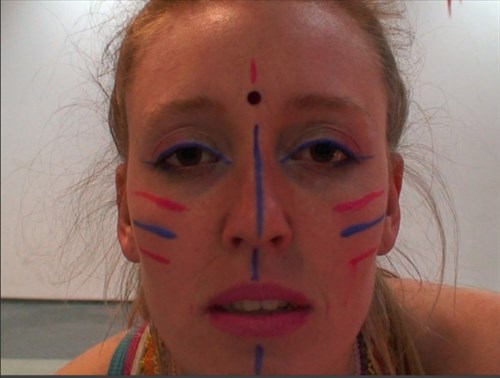 Aurora’s most beguiling work to date is ‘Adidas Mermaid’ (2010), recently screened across the UK as part of the Selected Touring Programme, curated by the nominees for the Jarman Award 2012. Wearing only Adidas tracksuit bottoms, Aurora stands in her bedroom, hair demurely covering her bare breasts, making mermaid-style poses. About two thirds of the way through, techno music begins and Beresford dances, legs still crossed as if a mermaid, but arms moving wildly above her, her breasts bobbing up and down.

Aurora’s work brings to mind early Tracey Emin, in particular her now iconic film ‘Why I Never Became a Dancer’ (1997), in which Emin narrates her story of teenage sexuality and failure to win a dance competition, culminating in her joyful dance to camera in her studio. Emin is often read in terms of truth and authenticity. But I would argue that there is a more Warholian vibe to her project of ’self‘, in that living as Emin and making art as Emin are deeply intertwined, if not one and the same thing.

Aurora could easily be tagged with the kind of ’bad-girl‘ baggage that Emin forever carries with her, but her performance as self-expression and as art work is more far more complex, for it addresses the semiotics of class, gender and culture today in world where real and virtual constantly collide.

Sophiel Aurora studied BA (Hons) Fine Art at the University of Sunderland, from 2005-2008.

In 2010 she was an artist-in-residence at the CooperGallery, Duncan of Jordanstone College of Art and Design, Dundee and was recipient of  the ‘Newcomer of the Year Award by The Journal Newspaper.

Sophiel is based in the North East and is represented by Workplace Gallery, Gateshead.

Kathy Noble is a curator and writer based in London. She was previously Head of Exhibitions at Nottingham Contemporary, and prior to that, Curator (Interdisciplinary Projects) at Tate Modern. There she co-curated The Tanks opening programme, working with artists including Anne Teresa de Keersmaeker, Sung Hwan Kim, Boris Charmatz, Ei Arakawa and Tania Bruguera. She also co-curated the performance programme Tate Modern Live, presenting projects with artists including Trisha Brown, Michael Clark, Keren Cytter, Katerina Seda and Robert Morris, and the online programme Performance Room with Pablo Bronstein, Jerome Bel, Emily Roysdon and Joan Jonas. She writes widely for magazines such as Afterall, Frieze  and Art Monthly and recent catalogue essays include Tania Bruguera, Geoffrey Farmer and Emma Hart.

She is currently Artists and Programmes Curator (Maternity Cover) at Wysing Arts Centre.