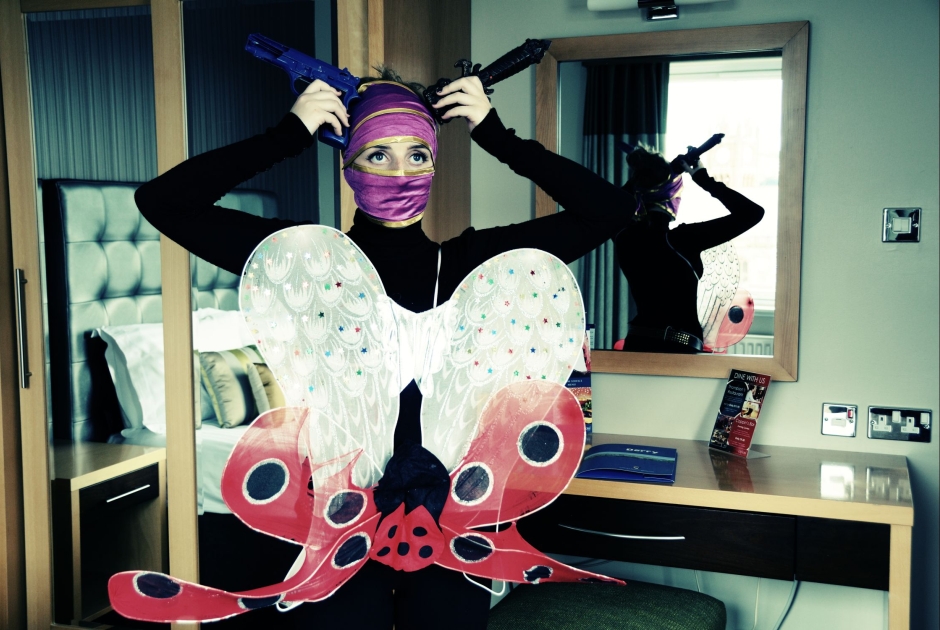 Sara Greavu is an artist and curator based in Derry, Northern Ireland. Peter Richards, an artist based in Belfast, discusses her video and performance-based practice.

What is revealed by dressing up? What is hidden in plain view?

The history and act of Masquerade, in particular the Halloween Carnival in Derry, Northern Ireland, have been at the centre of a range of bodies of work by Sara Greavu since 2005. The Halloween Carnival, promoted by Derry City Council as being the first and longest running in the whole of Ireland, is examined by Greavu in the contexts of Irish folk customs, social history and theoretical discourses exploring cultural identities and iconic stereotypes. In her works the Carnival functions as a space that intervenes in daily life; a sanctioned rupture within the everyday offering multiple representations of the present and a space from which to imagine possible futures.

The video work ‘Hybrid Halloween’ (2010) employs qualities of speculative fiction to portray a female character, a stranger, encountering Halloween Night in the city of Derry for the first time. Through the piece we are invited to watch as a stranger encounters the evening's revellers in full masquerade, their real identities simultaneously hidden and exposed. The stranger stands in as our unknowing surrogate, an imagined other from another time and/or place. She is free from the cultural baggage which comes with prior knowledge of the local context, a post-conflict city that remains to this day largely segregated.

The stranger is free to explore a-new, as researcher and participant, people dressed with feather headbands; in black jeans, jackets, hats and shades; all in black with small white collars, rubber masks of old men over their faces; in pieces of white fabric covering them from head to toe, with small eye holes; in black capes and long pointed white teeth; in red with horns; carrying guns, bows and arrows, staffs and so on. As the video progresses we witness the stranger trying to process (in real-time) her observations, collecting the lost and discarded costume elements from the city streets, then attempting to make sense of this new culture by assembling her own costume. The work acts to make strange - to defamiliarise - our existing relationships with the meanings associated with the costumes, removing them from their conventional, stereotypical perceptions.

An accompanying series of seven photographs depicts the stranger back in her hotel room sometime later, unsatisfied with her evaluation of the Halloween Night's experience. The stranger continues her attempts at understanding by assimilating details from the set of photographs. Each of the images features the stranger adorning a new costume constructed from the collected elements, and with each new permutation of costume the stranger questions further any conventional meaning.

In this work, Greavu draws our attention to Mikhail Bathkin’s description of the ‘swab episode’ in François Rabelais’ The life of Gargantua and of Pantagruel (1532-1564). However in Greavu’s work the concept is reversed: the objects are elevated from detritus to having value and significance rather than being debased.

In the video work ‘Carnival Mash-ups’ (2010) we are presented with a lone figure performing to camera. In Greavu’s manipulation of the original footage, the slowing down of the performance serves to heighten the ambiguity of the action. Is the figure dancing or rioting? The work brings to mind an incident in Derry’s history when the Halloween Carnival went beyond being an act of sanctioned subversive rehearsal and entered the realm - the absurdity - of a very real costumed riot. The riot followed the Greysteels Massacre of 1993 which saw two masked gunmen enter a bar in Greysteels, Derry, and shout ’trick or treat’ before opening fire. Seven people died and a further thirteen were injured.

The three pieces Greavu produced for her commission at the Context Gallery, Derry, ‘Halloween Lightboxes’ (2010), feature kaleidoscopically-reconfigured iconic stereotypes. The icons, fashioned in black and mirrored laser-cut Perspex, floating over a luminescent red surface, seductively draw in the viewer.

On closer inspection the patterned surface begins to reveal its dream-like depictions relating to the socio-political. Each image is made up of icons associated with conflict and oppression, as represented by the Halloween revellers in Derry by their choice of costume, such as PSNI officers, IRA volunteers, minstrels, Guantanamo prisoners, Ku Klux Klan, soldiers; suicide bombers, Hamas, harem girls, American Indians. These pieces hide, in plain view, incongruous, potential new relationships and alternative narratives.

Greavu’s examination of the theme of masquerade and the Derry Halloween Carnival is rich with multiple theoretical positions simultaneously wrestling for prominence. Each body of work employs a range of discrete strategies to interrogate the contemporary cultural landscape by the creation of alternative articulations. Her works scrutinise aspects of the site and subject of a post-conflict city and challenge assumptions relating to the complex, layered identities behind the masks that co-exist in the present. Greavu contributes through processes of exploration, manipulation and making-strange a vibrant reimagining of discourses regarding present and future cultural configurations.

Sara Greavu is an artist and curator based in Derry, Northern Ireland. She has an MA in Fine Art from the University of Ulster, Belfast where she is currently a PhD candidate. From 2004-2005 she was a reviewer for the contemporary art journal, Circa, and during 2007 was Artist in Residence in the Digital Artists’ Studios at Queen Street Studios, Belfast. In 2010 she received an Arts Council of Northern Ireland SIAP Award and since 2004 has been a member of the curating committee at the VOID Art Centre, Derry.

Sara Greavu lives and works in Belfast and is represented by The Golden Thread Gallery, Belfast.

Peter Richards is an artist and curator, born in Cardiff in 1970, and based in Belfast since 1994. He spent two years between 1996-1998 as a director of artist-run Catalyst Arts working alongside the likes of Phil Collins, Mark Orange, Niamh O’Malley, Susan Phillipsz, and Dan Shipsides. Whilst at Catalyst Arts he began to share time between his studio practice, and creating contexts and opportunities to explore the works of others, a way of working that he continues to this day.

He became Gallery Director at the Golden Thread Gallery, Belfast, in 2001, and has devised its artistic programme since, realising solo and group exhibitions in the gallery and at venues across China, USA and Europe, working with artists such as: Locky Morris, Franc Purg, Kevin Atherton, Susan MacWilliam, Paul Seawright, Willie Doherty, Gerard Byrne, Marjetica Portc, Seamus Harahan, and Colin Darke.