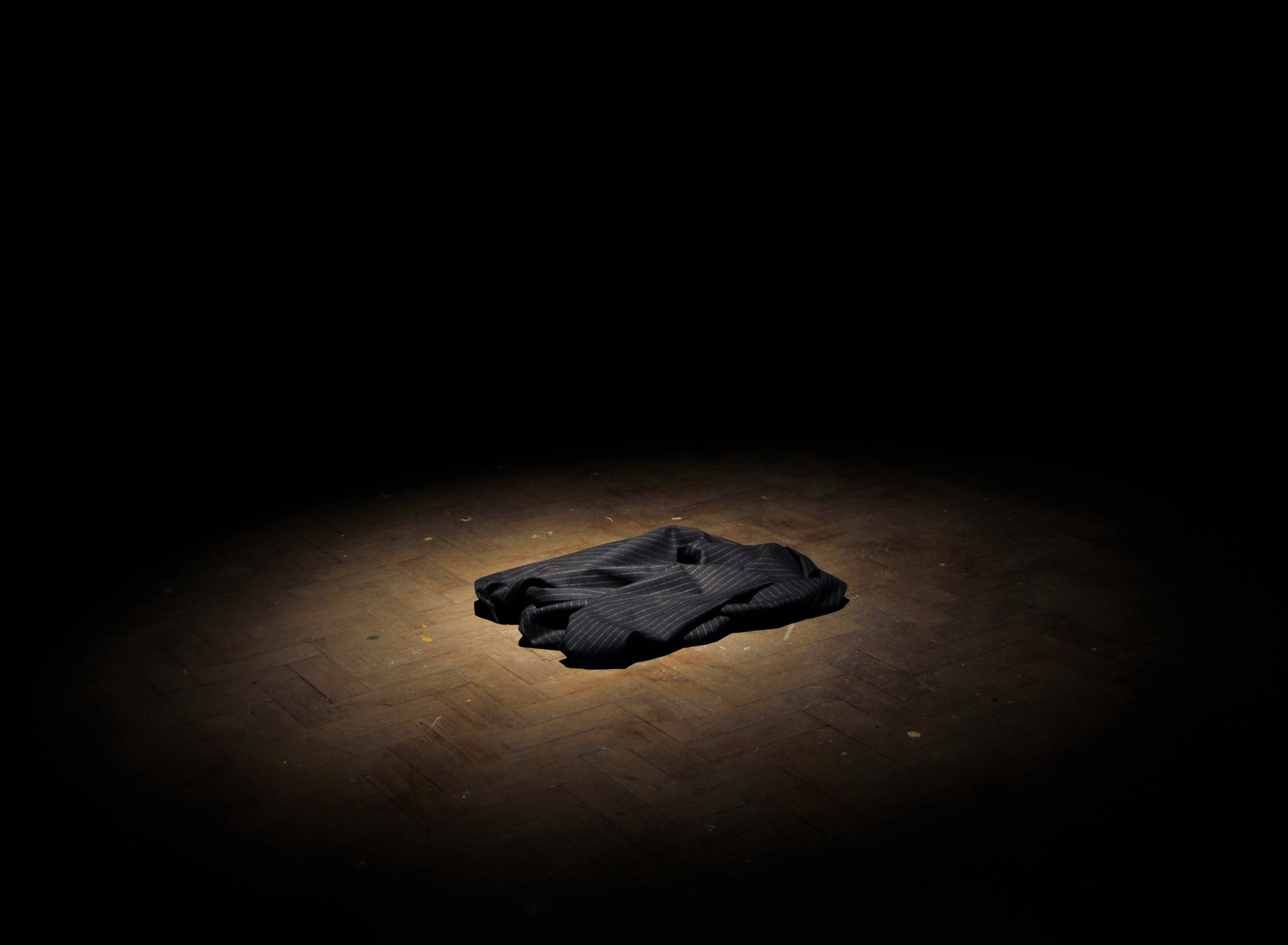 Richard Rigg, Cloth Arranged to Look Like a Jacket (Self Portrait), 2010, cloth, 10 x 60 x 44 cm. Credit: Courtesy of the artist and Workplace Gallery

A Fine Art graduate of Newcastle University, Rigg is one of a cross-generational portfolio of artists represented by Workplace Gallery, Gateshead and his first solo exhibition Holography was presented there in 2010. Rigg has also been featured in a number of group presentations, including Morphic Resonance at PSL Leeds, (2009); The Glass Delusion at National Glass Centre, Sunderland (2010), Cage Mix at BALTIC Centre for Contemporary Art, Gateshead (2010) and Broken Fall (organic) at Galleria Enrico Astuni, Bologna, Italy, (2011).

Some of Rigg’s works are delightful for their witty simplicity. 'Sheet of Paper / Folded / Framed' (2008) is an A0 sheet of blank, white paper in a right-angled frame. '363' (2005) is 360° plastic protractor, extended by an extra 3 degrees. In 'Pencil Drawing' (2006), an ordinary pencil is cut into six pieces and reassembled into a hexagon. It is rendered unusable as a tool for mark-making and yet is an arrangement of graphite echoing its own chemical structure. 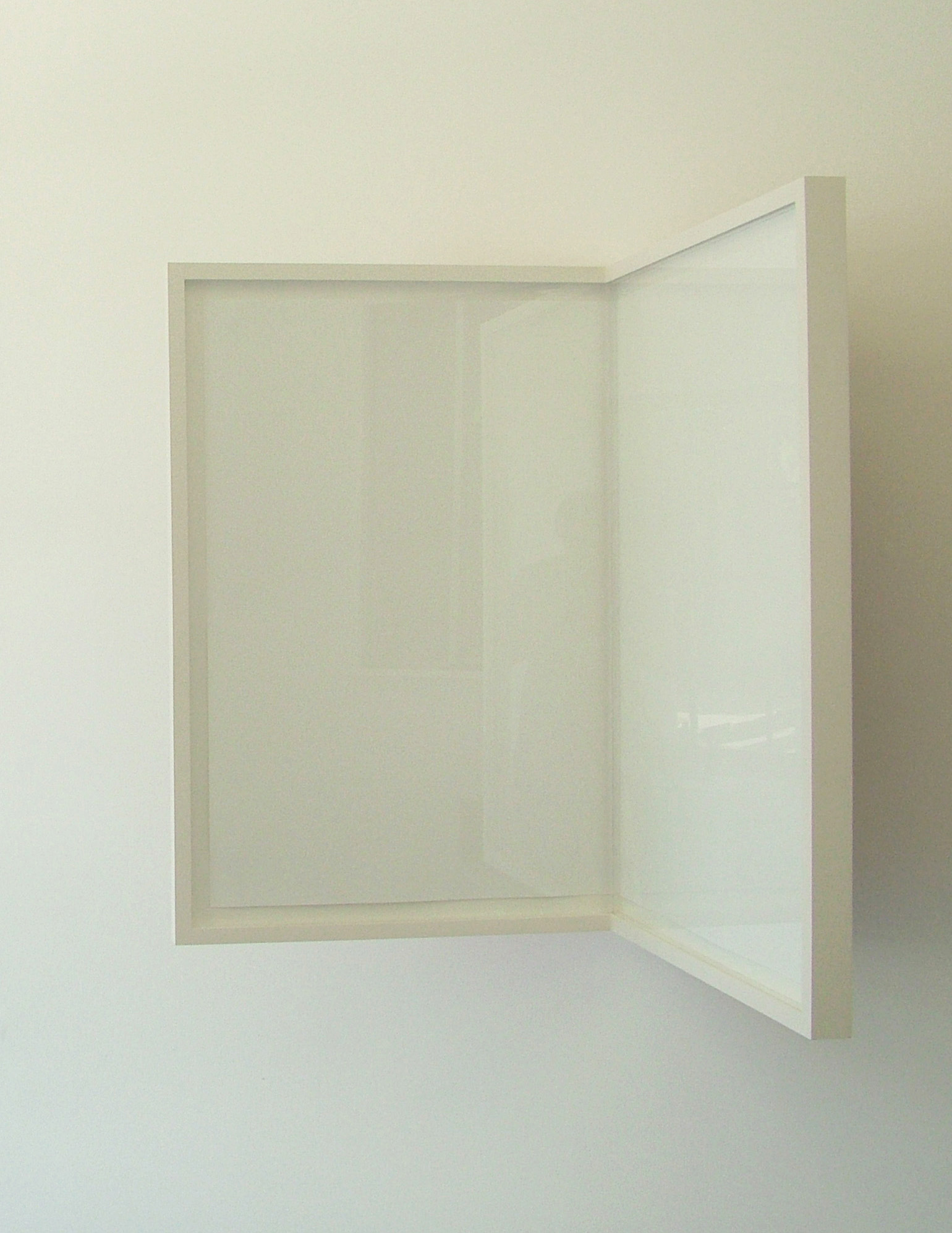 'Cloth Arranged to Look Like a Jacket (Self Portrait)' (2010) uses a single piece of grey, pin-stripe fabric and teases the viewer’s eye into seeing a familiar item of clothing in a spot-lit heap on the floor. The title also hints at Rigg’s own discomfort with being the centre of attention. Here is an artist who produces work to satisfy his own curiosity, rather than seek the limelight.

As well as small-scale, discrete works Holography featured pieces integrated into the site. Two disused telegraph poles ingeniously installed in the stairwell of the Gallery could be viewed close up from bottom to top. The poles became figurative, the short length of cable connecting them a metaphor for conversation. However the title of the work – 'I forgot what was said when we were outside, stood empty, now without those words I fell back' (2010) – hints at a breakdown of communication, melancholy and silence. In another space 'This One, the Next, and the One After That' (2009) manifested itself as an occasional drip on the floor, the complex mechanics of water tank, clock and valve hidden above the ceiling.

In another intervention, 'The Broken Appearance of the Floor' (2010), a pair of oars seemingly emerged from the floorboards to suggest an invisible rowing boat crossing the room. In a subtle detail, the painted oar handles were a precise shade of blue mid-way between Oxford and Cambridge's rowing colours. This reference is probably lost on most viewers but offers another layer of meaning indicative of Rigg’s richness of thought.

Such elaborate back-stories bring to mind the work of celebrated German artist Andreas Slominski, who conceives absurd scenarios and actions that result in seemingly simple objects. Rigg adds his considerable technical skill to the production of his seamless works: the window frame that spills onto the floor in ‘Latent Morning’ (2010) is a magnificent work of carpentry, duplicating perfectly another window in the building.

On other occasions, Rigg turns to found objects to explore his ideas. ‘Weighing Scales’ (2005) sees two identical sets of analogue kitchen scales, one placed upside-down upon the other. The differing weights on the dials are baffling: which is weighing the other? Or, as with Piero Manzoni’s celebrated plinth, are the inverted scales in fact weighing the entire world beneath it? This echoes ‘Wall Hanging’ (2010), a negative cast of a door-hook in an otherwise featureless wall that defines absence flowing without limit into the space around.

Rigg’s practice also relies on engaging other professionals in the realisation of his works. His 'Piano' (2007), an upright piano tuned entirely to middle C, was brought to life in a stunning one-off performance 'Ballade Op. 23' by concert pianist Fang Fang. Other works draw on mathematics, such as the cyanotype 'The Fort was here before it was built' (2010), which explores abstract Knot Theory and again exemplifies Rigg’s wide-ranging mastery of different media as well as his cross-disciplinary investigations.

Rigg continues to develop a number of ambitious projects. With his uncompromising attitude to quality, the resulting works will undoubtedly continue to intrigue and dazzle the viewer. His short-listing in the 2011 Northern Art Prize and presence in the associated exhibition at Leeds Art Gallery will deservedly bring him to the attention of a wider audience.

Rigg was shortlisted for the 2011 Northern Art Prize and is represented by Workplace Gallery, Gateshead.

Rebecca Morrill is a curator and writer based in Gateshead. She was worked since 2010 as Head of Collector Development, North East, for the Contemporary Art Society. She was Producer for AV Festival 10 & 12, (international biennial of visual art, music and moving image that takes place across Newcastle, Gateshead, Sunderland and Middlesbrough). She is also a contributor to the online contemporary art magazine This is Tomorrow. She is a Trustee of Bupa Great North Run Culture and one of the curatorial Advisory Panel for CIRCA Projects.

Morrill previously worked for five years at the Serpentine Gallery, London. As Exhibition Curator, she co-curated, with the Directors, exhibitions including Indian Highway, Gerhard Richter, Maria Lassnig, Anthony McCall and Damien Hirst's murderme collection and oversaw the editing and production of the catalogues accompanying these shows. She was also Project Organiser on three Serpentine Pavilion annual architecture commissions.

Prior to the Serpentine, she had roles in both the Exhibitions and Communications departments at Whitechapel Gallery, London, from 1999 to 2004, which included as Exhibition Organiser for Paul Noble, Franz West, Cristina Iglesias and Rodney Graham. She also launched and managed for six years the first website for the Whitechapel