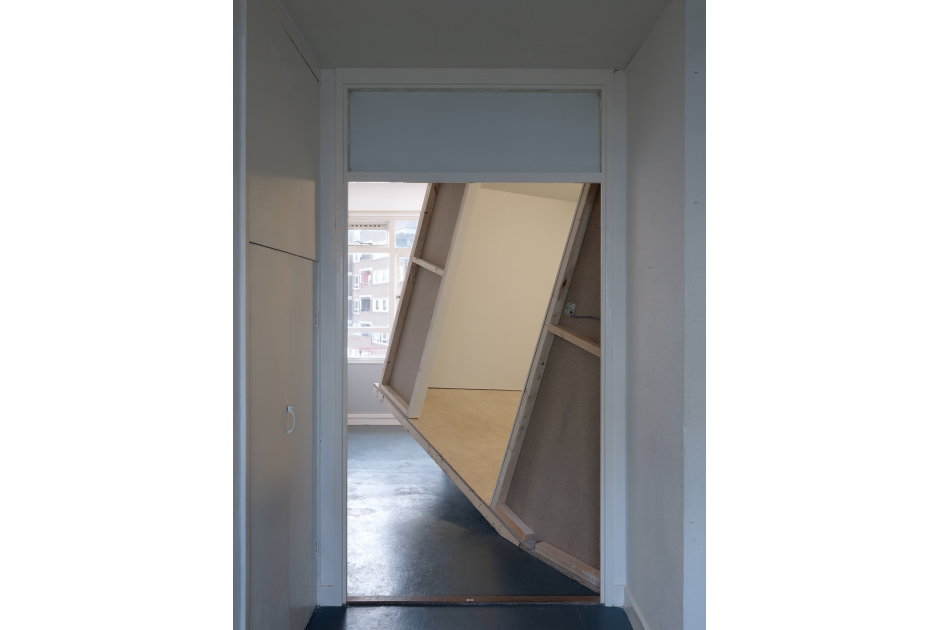 Independent curator Shama Khanna discusses the sculptural practice of Joe Watling, an artist based in London.

‘Placing on Stage’ (2011) is a sculpture by Joe Watling that was installed for the period of a year before it was revealed as a work in itself. During this time the work held within it nine different shows curated by Paul Good and Kirsty Wood of SHIFT at their gallery in Bow, London.

On the occasion of the gallery’s tenth exhibition, this time by Watling himself, the interior cladding of the space – its floor, walls and ceiling – were entirely repositioned by the artist. The space was literally lifted up and rotated, allowing visitors to see its edges and for the shapes and the people it contained to be tilted on their axes, so that they appeared to fall towards one corner.

The sculpture became framed by the dimensions of the original room it had kept concealed for the previous year. The work treated the space and the pattern of people visiting each of the shows as a discrete history: as a found object detached from its original surroundings, turned inside-out and replaced, facing a completely new direction.

Watling’s practice affects the rules of the space it occupies, prompting the viewer to question the ‘facts’ rather than re-learn new rules. These facts - the ‘functional’ simplicity of a wall as a support, the ‘distance’ between bodies and things, the ‘grounding’ effect of gravity – outline the way we produce space through language. Watling throws the grammar of fixed objects in space up in the air and re-imagines them occurring as events on a temporal map.

His work reveals a parallel reality within the fabric of the gallery space where the presence of the viewer is key. ’Continuous Column, Part 2 (Ongoing)’, is a hyper-real encounter with a gallery pillar that has been tilted very slightly, by just eight degrees.

The structure appears to both launch itself through the ceiling and descend below the floor. A light switch mounted on one side of the pillar tempts the viewer to enter into the duality presented by the work by turning off the lighting to the upper gallery.

By interacting with the object in this direct way the viewer becomes an unwitting participant in the work.

Watling imagines technology pushed to the limit of its usefulness in order to explore a phenomenology of 'broken tools’. Here, construction and digital software are manipulated to expose loopholes and technical vulnerabilities, prompting a sudden sense of the viewer’s disempowerment, drawing a comparison with their experience outside the gallery as ‘users’ and agents.

A powerful, high definition projector is used for the work ’You Finish Where You Begin‘ (2010) to simulate the movement of lights and shadows back and forth, fading and pulsing across a fabricated concrete object. Passing in front of the projection, the viewer breaks the illusion of the ‘moving’ sculpture by throwing a real shadow on the work and shorting the circuit.

Watling uses the term ‘flipping’ to describe this re-contextualisation of the gallery as an object in itself. But what is it to have such an expanded perspective on a support system which normally remains contained and therefore invisible? Is it to attack it for its deception of being there, silently influencing our behaviour? Or perhaps it is to imagine a dual reality of temporal-permanence where the ground sometimes becomes the foreground and where passers-by become the unsuspecting agents complicit in the work.

Joe Watling graduated in 2006 with a first class Fine Art degree from London Metropolitan University and was awarded the Owen Rowley Prize for his degree show.

He lives and works in London.

Shama Khanna (born 1981, Nairobi) is a curator and writer based in London. She is the curator of the thematic programme at Oberhausen Film Festival 2013. Over the course of her career she has presented projects at Showroom, E:vent gallery, Tate and Lux/ ICA Biennial of Moving Image in London, Spike Island in Bristol, Iaspis in Umeå, Kunstverein Muenchen and with e-flux, Performa and P. S. 1 in New York City. She writes for Frieze and Mousse magazines as well as numerous independent publications. She teaches at Chelsea College, University of the Arts London and is a participant on the 2012/ 2013 Curatorlab at Konstfack, Stockholm.