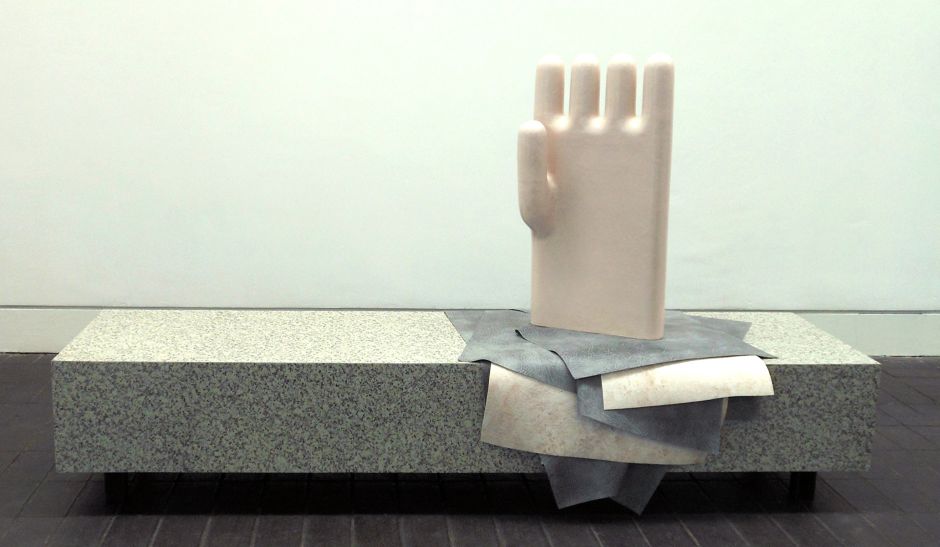 James Rigler makes work predominantly in ceramics, but increasingly incorporates other complementary and functional materials such as metal, wood and fabric into his sculptural works. His large-scale pieces employ a rich language of architectural features, domestic ornaments and utilitarian objects, evoking both intimate and monumental settings.

Rigler’s earlier ambitions to become an architect were refocused when he recognised that it was the ideas surrounding architecture that interested him rather than the practice itself. A built element in a landscape can function as both a practical structure and as an historical reference point with narrative capabilities, and Rigler’s practice is built upon this understanding. His sculptures capture these qualities: ceramic walls, buckets, follies and flags, for example, become objects in a gallery landscape.

Having grown up in a small Devonshire village, he makes objects that are deeply rooted in his childhood. He has always been intrigued by the effect of objects in the landscape, for example how a stone wall in a wilderness indicates the presence of man, and so creates an immediate narrative connection with its finder. This potential for story-telling is very present in his work. 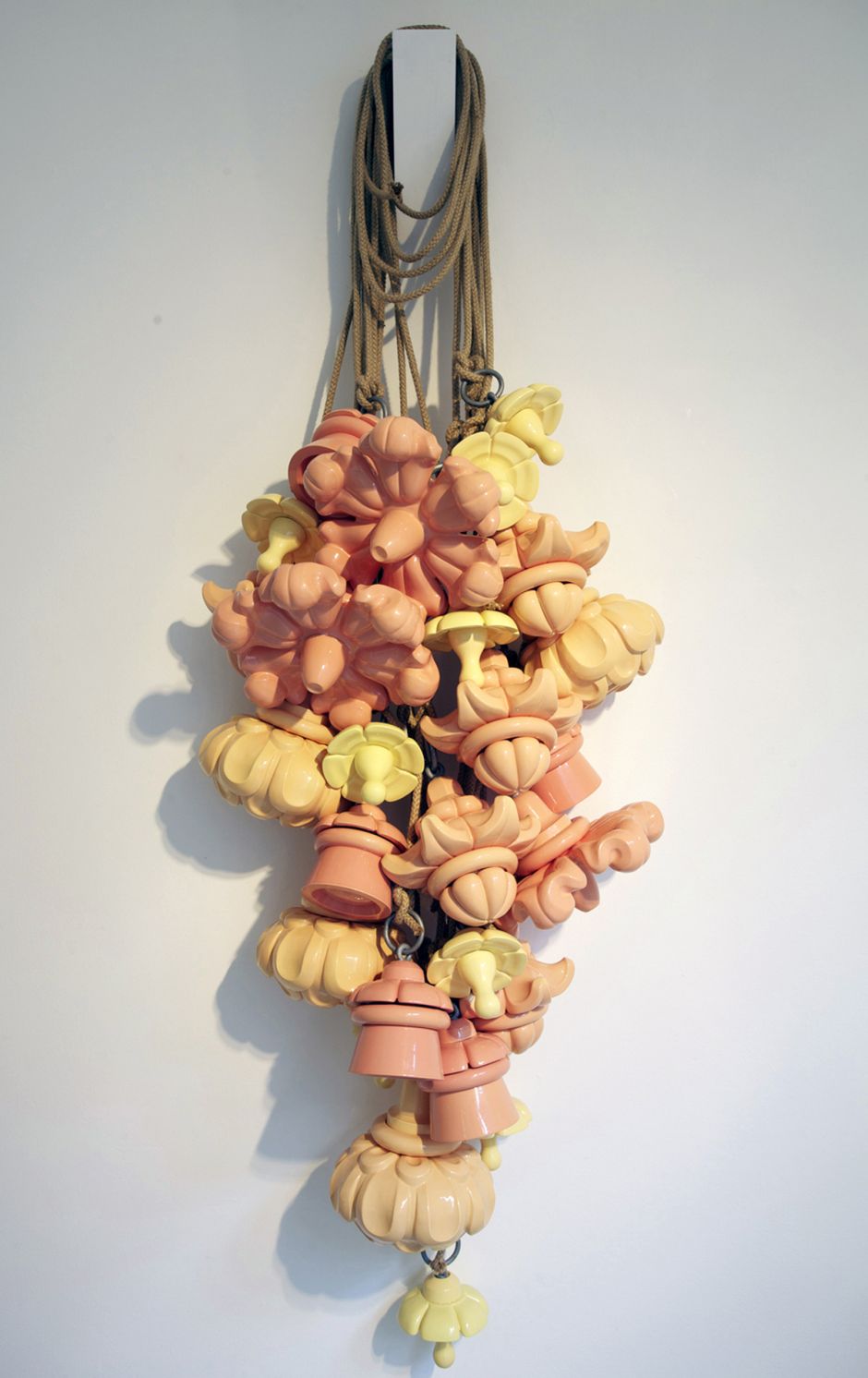 It is evident that Rigler enjoys the challenge of making. His dedication to ceramics has given him the skill to use the medium confidently as a tool. His substantial forms, with their flawless glazed surfaces, are often made from components that Rigler has designed to be assembled as if part of a kit. These in turn are pieces that fit together to make up a bigger picture comparable to objects in a child’s toy set, or characters in a story when seen in the context of an installation or exhibition.

In The Lost World, his first solo project at Marsden Woo gallery, London in 2011, the audience is presented with elements of a fictional landscape, equivalent to the conventional symbols found in a fairy tale. 'Purple Jug', a round-bottomed container filled with a milky substance (which is actually a circular piece of white glass), and balanced on a neat pile of fabric, alludes to a character in the unknown tale performing a task. 'Green Bundle' is an arrangement of enlarged ceramic twigs bound by a rope. Each twig is made from sections that are clearly visible, giving it a toy-like quality and suggesting the potential for rearrangement.

'Cascade' and 'Lantern' also share this kit-like quality. 'Cascade' provides the ‘flora’ in the landscape, a hanging arrangement of architecturally inspired flowers and buds in muted shades of orange and yellow, while 'Lantern' is the built element in the tale. It is an interpretation of neo-gothic architecture made from wooden panels covered in marble effect, sticky back plastic and ornate ceramic window surrounds and finials. It too possesses a sense of temporality and a potential for play. It has been raised from the floor on a trestle table and cushioned by a packing blanket, as if representing a distant castle on a hill. It is the grown-up version of a cardboard castle that a child might make, fit for purpose in an imaginary land. 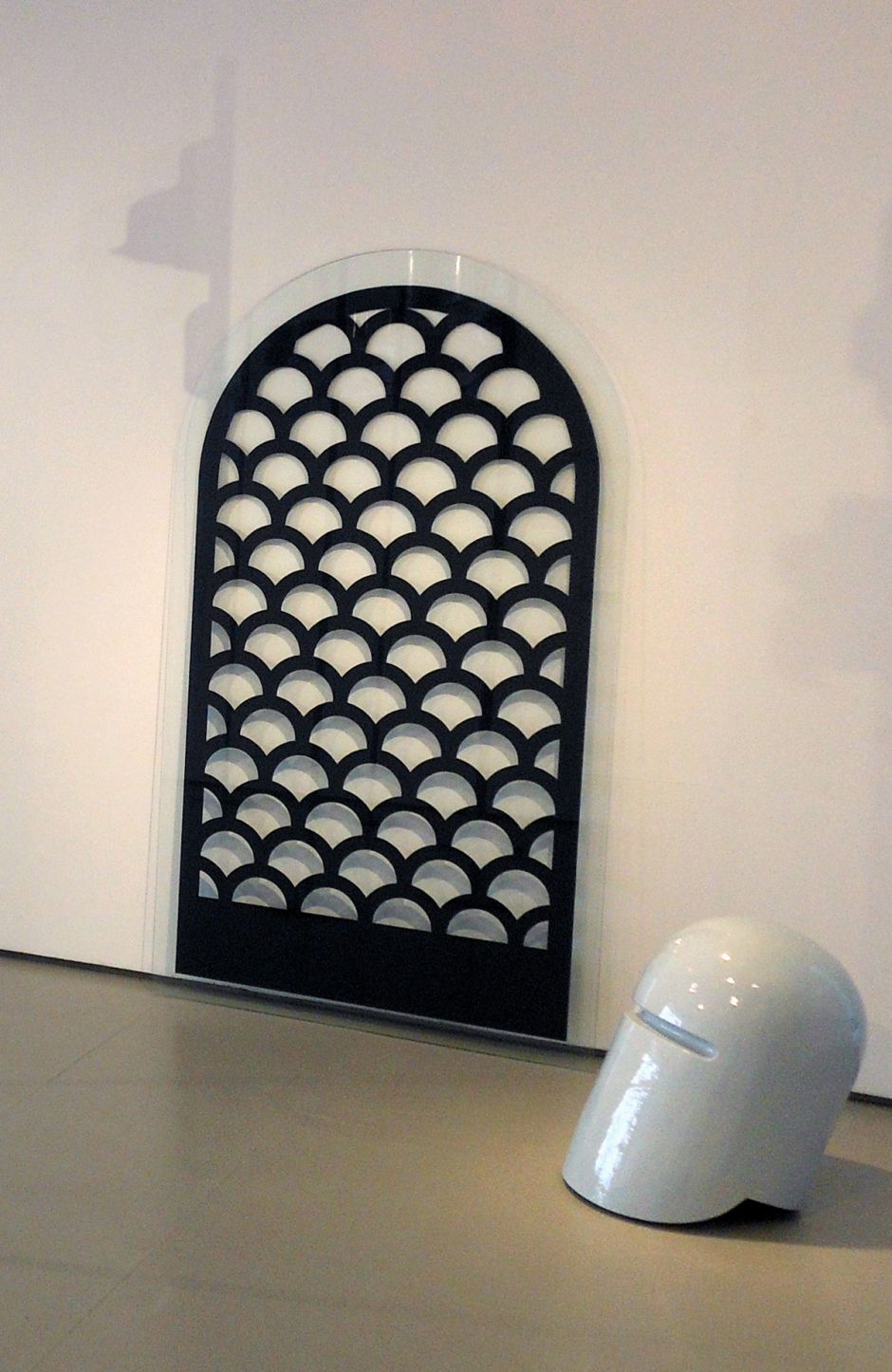 Rigler cites Thomas Shütte as an important influence and you can appreciate a similarity in their regard for the model as a tool for communication. He has spoken of his pieces as “….somewhere between the model of the thing and the thing itself.” What distinguishes them from models is Rigler’s sensitive application of selected materials, but akin to models they provide us with the basic elements of storytelling around which anything could happen.

There is also an autobiographical aspect to several of his pieces. 'Lantern' does not specifically reference, but can be linked back to, a ruined Tudor house, buried in a forest which Rigler used to explore as a child. 'Token' stems from the image of a large white glove, King Henry III’s gauntlet in fact, which appears on signage in the village of Chulmleigh where Rigler grew up. The glove signifies permission granted by the King in around 1256 to hold the Chulmleigh Old Fair and still appears on banners to mark the annual event. Out of context this three-dimensional cartoon-style hand becomes another ingredient in Rigler’s cipher.

'Token' appeared in his most recent exhibition, The Fading City at Marsden Woo Gallery, in which the possibilities of an imagined landscape become more epic. He again creates an engaging environment but encourages the viewer to look past it, out through the 'Ancient Gate', an arched glass panel with a fish scale design painted on one side leant casually against the gallery wall, and, beyond the 'Castle Wall', a wooden panel clad with unglazed ceramic tiles, standing independently in the gallery like a piece of theatrical scenery.

There is an air of retro-futurism as Arthurian legend collides with 1950s and 60s interior design and then looks beyond towards a utopian future. 'To the West and on to the West', a set of ceramic flags suspended in flight, evokes the sense of a ghostly crusade. The overall feeling created by these and other works in the show is wistful and romantic. Rigler’s objects possess the power to propel the imagination; the banal becomes noble and the ordinary extraordinary.

He has undertaken residencies at the International Ceramics Research Centre, Guldergaard, Denmark, the Northern Gallery for Contemporary Art, Sunderland, and Cove Park, Scotland, and he has recently been appointed as the Ceramic Artist in Residence for 2013 at the Victoria & Albert Museum, London.

Recent commissions include a table for Chatsworth House, Derbyshire and an installation for the restaurant Zizzi Central, St. Giles in London, and he has been selected to exhibit work in the Awards Exhibition at the British Ceramics Biennial 2013.

James Rigler lives and works in Glasgow and is represented by Marsden Woo Gallery, London.

Dawn Youll is a ceramic artist based in Glasgow. She has a BA in Ceramic Design from Glasgow School of Art and an MA in Ceramics from Cardiff School of Art & Design. Her work has featured in numerous exhibitions across the UK and she has represented the UK in Denmark at the European Ceramic Context 2010 exhibition and in France at a WCC-Europe exhibition.

In 2010 she won a Jerwood Makers Award and in 2011 she was awarded the prestigious Arts Foundation Fellowship for Ceramics.

Her practice centres around the exploration of a personal landscape: the urban landscape, the studio environment, and the making process itself. From research gathered she considers form, colour, surface, and often words separately, allowing them to feed in gradually finding comfortable partners and groupings as a body of work as a whole develops. She applies surface and colour to blank components and curates combinations of semi-abstract ceramic sculptures in order to explore potential narratives.

She has previously taught at Glasgow School of Art and has been a visiting lecturer at Gray’s School of Art in Aberdeen. She currently works part time as Crafts Programme Producer for Cove Park, an international artist residency organization on the west coast of Scotland, and she works from a studio in the Glasgow Sculpture Studios.

Summer of Craft on Axisweb