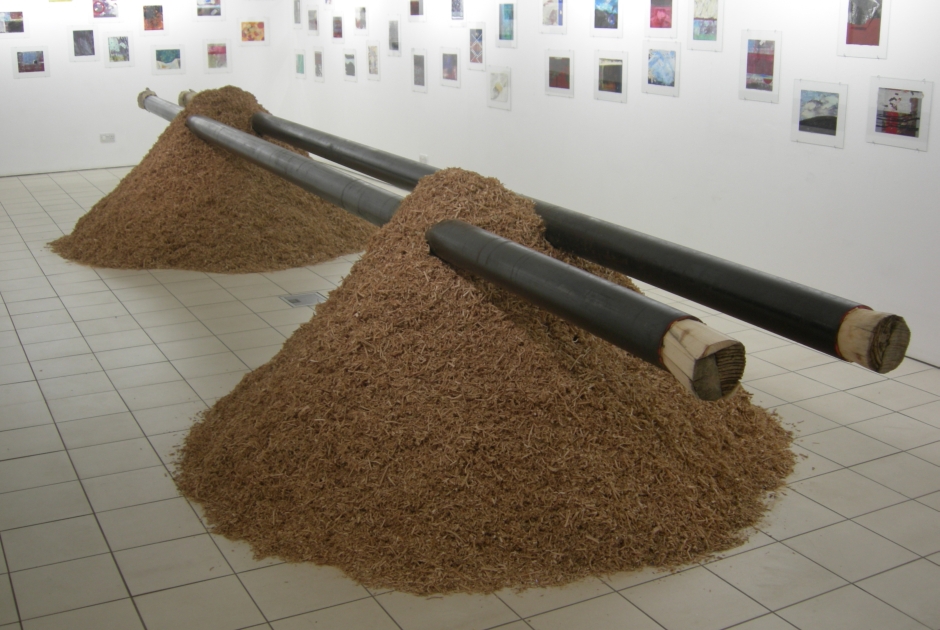 His research is often conducted through different collaborative groupings and methods, most notably intervention/installation work such as ‘Virus’ (with Stuart Bennett and Alan Holligan), collaborative drawing (with Karen Kirkwood) and most recently the experimental ‘Ironfield’ project (with Gordon Munro). It is surprising then that Robertson’s individual working practice is so visually distinctive, especially when his choice of materials can initially seem to be arbitrary studio detritus or equipment. His dictum Work Varies According To Situation accurately represents his approach both to the process of making work and to the process of collaborating in the production of work.

Robertson’s installation work often comprises the somewhat provisional arrangements of seemingly dormant objects, interrelated through the pitch and tone of their material qualities. The work is not dramatic but possesses a tangible sense of impending disturbance.

Most notably in the installation ‘Tongue’s Memory of Teeth’ (2008), Robertson selects objects (sandbags) to unite with his ‘made’ objects – canisters with welded-on spikes, handles, hinged legs; these latent devices are drawn together by wire stretched limply across the installation space. In another corner a tattered image is impaled on a series of wooden slats. It is unclear whether the image is Robertson’s own or a found image, but it looks like a document of a process-based piece, akin to his experiments with slow-drying cement.

Alongside this work, the smaller installation ‘The Cave’ (2008) can be seen as a composite part which shares the same visual language, its rusted steel planks forming a lean-to shelter and supported by sandbags. A branch-shaped steel tube balances on narrow trestles. The work sits somewhere between fugitive and stable, dormant and active, balancing lo-fi with more ‘worked’ materials.

Robertson ascribes his use of discrete objects to a desire to slow down time by way of time-based processes such as casting. The attempt to document the almost invisible stages of preserving or drying is a slow pursuit through which Robertson aims to extend the span of material status and legacy of physical influence in matter and objects. The friction between installed objects and the ‘slow’ time-based works crystallises in the drawings Robertson makes as part of his tangential research. What interests me most about these is that the drawn image is as provisional as the installed work; that the drawing and installation speak the same language. The transient quality of photocopies and carbon paper appears to be etched / scratched within the drawings, and they ‘live’ – as if the lines themselves possess the ability to move and create spontaneous upheaval.

The latent possibilities of materials - their attraction / repulsion, and their surroundings / situation – are parameters that fit within Robertson’s sculptural realm. In ‘Casimir in Monoceros’ (2007) two parallel steel pipes ‘float’ on piles of coarse saw dust. The ends of steel pipes are ‘stoppered’ with rough, over-long wooden plugs and the steel itself is treated with linseed oil. The title refers to the physicist Hendrik Casimir who along with Dirk Polder identified quantum mechanical attraction between material in response to energy fluctuations within the vacuum of empty space. This reference is not flippant: it is entirely apposite that Robertson references the work of a scientist whose experiments predicted quantum mechanical attraction while he was studying the viscous properties of mayonnaise.

Robertson explains that Monoceros is a more or less random piece of sky, and while this notionally 'empty space' above Sirius enables the particle attraction known as The Casimir Effect, it also provides Robertson with a site for his second dictum: that Science Should Always Yield To Poetry.

Ewan Robertson is a lecturer in Sculpture at Edinburgh College of Art. From 1996-2007 he was a member of the group Virus, an artist-led initiative based in Edinburgh, showing nationally and internationally during this period.

He lives in Edinburgh and works from Edinburgh Sculpture Workshop.

Dr Kristin Mojsiewicz is an artist and lecturer at Edinburgh College of Art, where she teaches on the BA and MFA programmes. Based in Glasgow, she is co-director of Brass Art with collaborators Chara Lewis (Manchester) and Anneké Pettican (Huddersfield).

Brass Art have worked together since 1999, collaboratively producing work, commissioning and curating. They were nominated for the Northern Art Prize in 2007, and recently exhibited at the A Foundation – Liverpool (2010), Concrete and Glass – London (2010), Object Gallery – Sydney (2010), The International 3 – Manchester, (2010, solo) the Jerwood Drawing Prize (2008), Croft Castle commission (2008), Yorkshire Sculpture Park (2008, solo).

She works mainly in video, installation, photography and drawing in her own practice, which focuses on the process of re/orientation within any given space. In 2009 she completed a practice-led PhD at Edinburgh College of Art (AHRC funded).

Kristin and Brass Art are represented by the International3, Manchester.