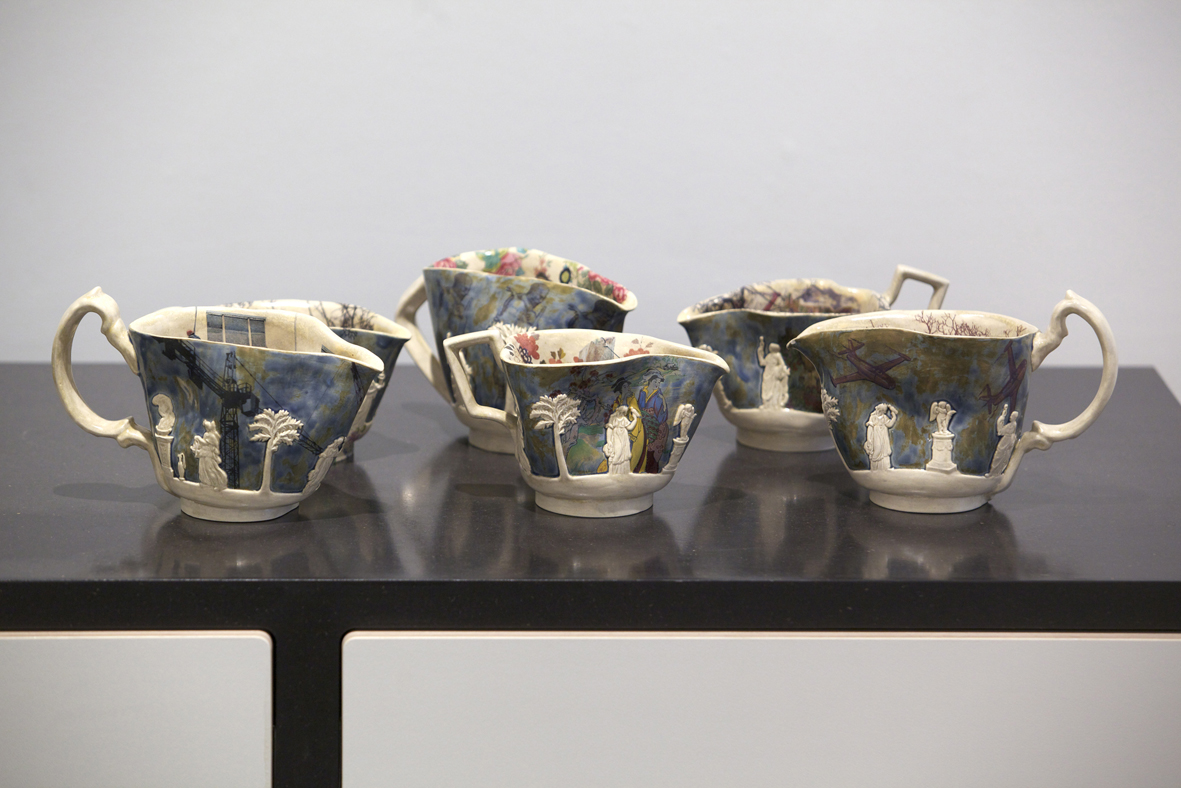 If you were asked to name the most glamorous person in London, and replied that she was a woman in her mid-60s living in North London with a chinaware obsession, who spends some of her time mending clothes for friends, you wouldn’t be wrong. The lady in question is Carol McNicoll. Best known, perhaps, as a ceramic artist – her work in the medium is in the collection of many museums including my own, the V&A – she is also (in no particular order) a political activist, community gardener, clothing designer, subcultural denizen, ace droughtsman, and when it comes to her own environment, an architect.

You may well associate the term gesamtkunstwerk (total work of art) with intense, mustachioed German men of the late nineteenth century. But that’s really the best word to apply to McNicoll’s aesthetic proposition. Her below-ground flat is thickly applied with collaged elements of every kind. The walls are completely covered in bits of tile, cut-apart olive oil cans, and African textiles. A striped hammock traverses the space, all the better to look up at the ceiling, which is fitted edge-to-edge with plaster rosettes. In a particularly wonderful conceit, the back garden is lined with large mirrors, tilted so as to bounce available sunlight into the kitchen windows.

The objects that McNicoll sends out into the world are like samples from this environment. Of late, they have tended toward the explicitly political. An avid reader of Noam Chomsky (normally unimpressible, she swoons “my hero” at the mention of his name), she is pretty firmly convinced that the world is going to hell, if it hasn’t already arrived there. She expresses this sentiment through her work, not without humour. Figurines of soldiers and miniature helicopters, slipcast from children’s toys, cavort alongside tourists, carousel horses, and the occasional teapot to make up a grand guignol of the contemporary military-entertainment complex. The surfaces of these objects are typically printed with patterns like grandma used to make. The conflation of hegemonic violence and country tearooms is essentially postmodern in its method, but (it seems to me, as an American expatriate living here for eight years) peculiarly English in its worldview. If McNicoll belongs to any tradition, it is that of the arch satirist, a British speciality that stretches back through Roxy Music in the 1970s (she’d been part of that scene) to George Orwell to Lewis Carroll to William Hogarth. 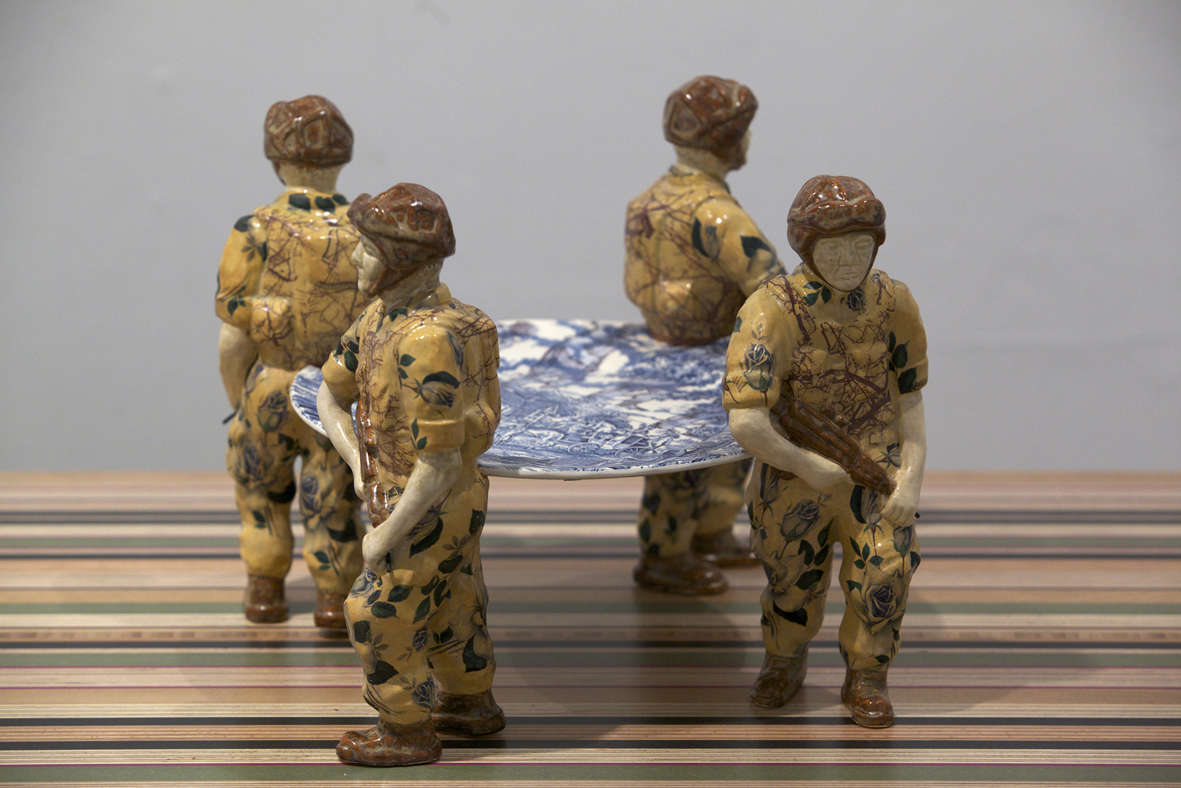 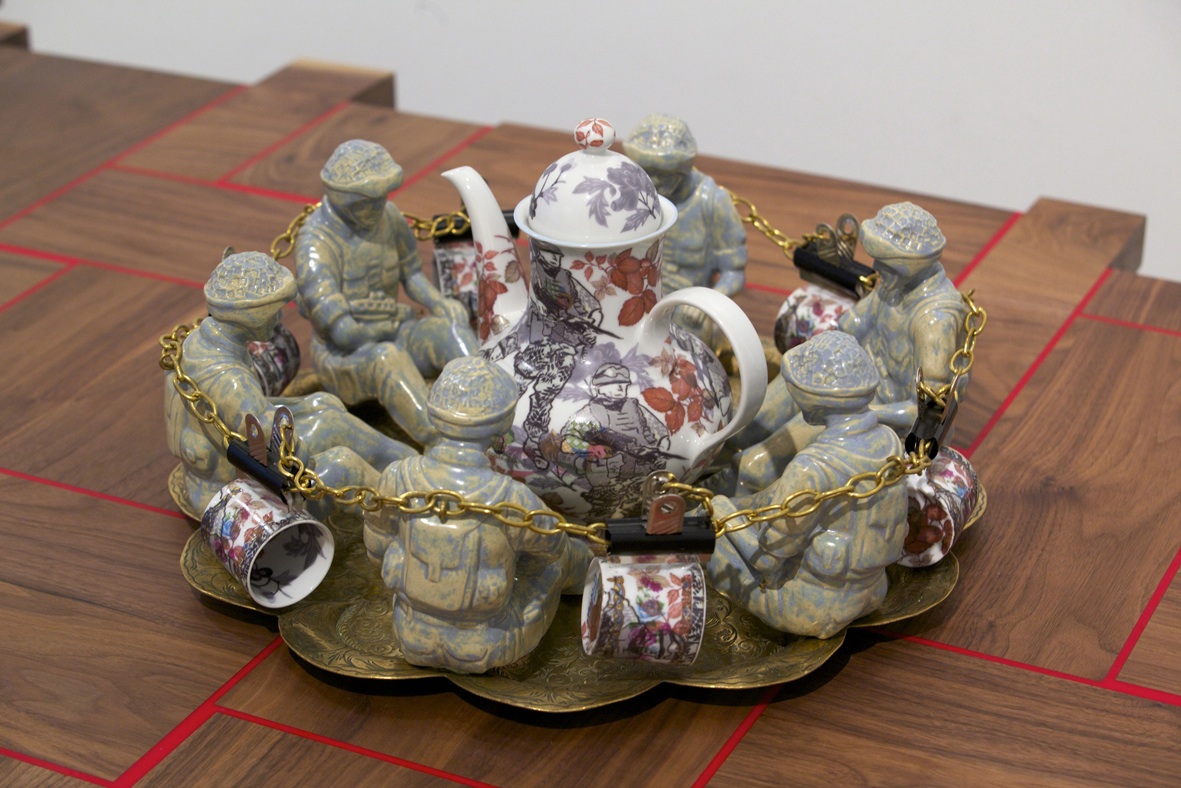 McNicoll discovered vintage clothing about 30 years before the rest of us caught on, and since then she has rarely left a garment alone. Like her home and her artwork, her clothes are a bewildering bricolage: little cardigans with added stitching, patchwork trousers, oversized iridescent spectacles. What should amount to a train wreck of gaucherie all makes perfect sense. Lately she has been embellishing clothes for lots of other people, including myself. It began when I ripped a trouser leg while pedalling my bike to work. I don’t know what I expected when I asked her to mend it, but what I got was absolutely fantastic – the trousers and jacket had been embellished with a brown-and-yellow appliqué.

As a critique of authorship, the Italian artist Piero Manzoni used to sign the bodies of his clients, declaring them to be works within his oeuvre. Though McNicoll is not an artist of particularly Conceptualist bent, I feel that something not dissimilar happens to me when I wear one of my Carol-adapted suits. I’ve been inducted into her aesthetic, which is so eclectic, so open at the seams, that it can admit just about anything – even me.

Dr Glenn Adamson, Head of Research at the V&A, London

Carol McNicoll (b. 1943, Birmingham) studied Fine Art at Leeds Polytechnic from 1967-1970, followed by MA Ceramics of the Royal College of Art in 1970. She has exhibited widely in the UK, Europe, Japan and the USA.

In an age of information technology, making things by hand is a supremely anachronistic occupation. The first world has relegated the unglamorous and unprofitable activity of production to the third world, reserving the cleaner and more lucrative manipulation of information for itself. The capacity for making things has always seemed to me to be a defining human characteristic. I now realise that its expression is a great luxury which is only available to the very poor, the very rich or the very foolish. I count myself as one of the very foolish, still believing it is possible to make a living as a potter, while the rest of the first world is engaged in e-commerce. The home, a context the cutting edge of the Art world abandoned sometime around 1945, is the context I find the most intriguing. I am entertained by making functional objects which are both richly patterned and comment on the strange world we have created for ourselves.

Dr Glenn Adamson leads the Research Department at the V&A, London, working closely with colleagues within the museum and in collaboration with scholars and institutions worldwide. He holds a PhD in art history from Yale University, and was previously curator at the Chipstone Foundation in Milwaukee.

He co-curated (with Jane Pavitt) the exhibition Postmodernism: Style and Subversion, 1970 to 1990, which opened at the V&A in 2011. He has also written widely on craft history and theory, in such books as Thinking Through Craft (2007), The Craft Reader (2010), and The Invention of Craft (2012); and has edited numerous publications including the triannual Journal of Modern Craft, the volume Global Design History (co-edited with Giorgio Riello and Sarah Teasley, 2011), and Surface Tensions (co-edited with Victoria Kelley, 2012).