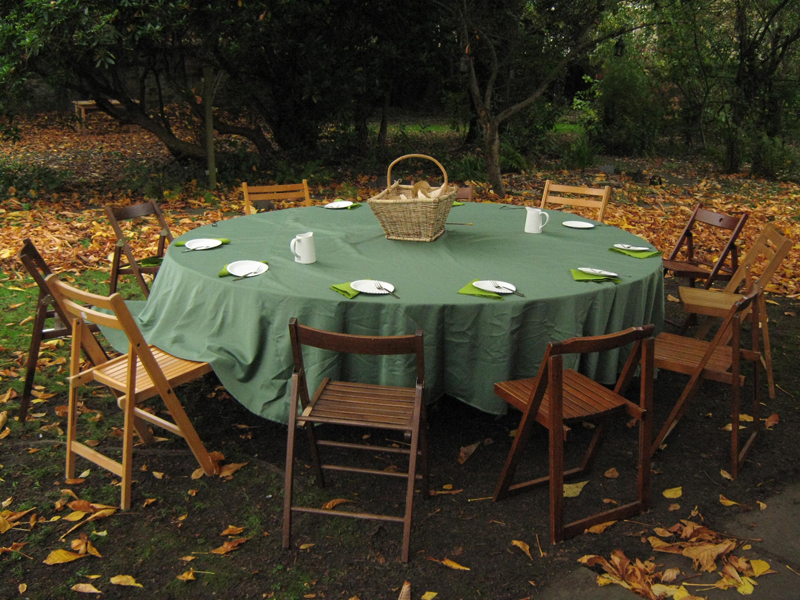 Glasgow-based artist Alex Wilde is a true social animateur. In her practice she is not a performer, not a gardener or a cook or a social worker: she is an artist who animates the relationships between herself and others, between individuals and their world.

It is unusual to begin a discussion of an artist’s work with an explanation of what they are not. And yet in considering Wilde’s practice this straightforward clarification may be useful, as her work goes right to the problematic nub of what art – and artists – may or may not be.

Wilde's practice is complex, layered, and at times all but invisible. She makes artworks that are conversations, which are growing plants, which are the act of cooking or sharing meals, and which are the periods of time that one person spends willingly with another.

Her work is both momentary and durational, and teeters (dangerously, fruitfully) on a brink between being utterly universal, and dogmatically specific. Wilde is talking to all of us, for all time, always: No, she isn’t; she is talking only to you, right now, today.

The recurring themes that Wilde returns to time and again in a variety of contexts (food, conversation, growing) go to the heart of what it means to be human. We are each of us strange, somewhat autonomous and somewhat relational creatures. We exist in proximity to and yet distinct from our fellows and the world that supports us. And it is precisely those moments when our boundary of self is breached, when we are made vulnerable by the essential act of taking something of the external world into ourselves, that become for Wilde moments of potential artistic animation. And so we meet; a meal is choreographed; a conversation is introduced; and something is put into our mouths (whether a word, or a spoon of soup). 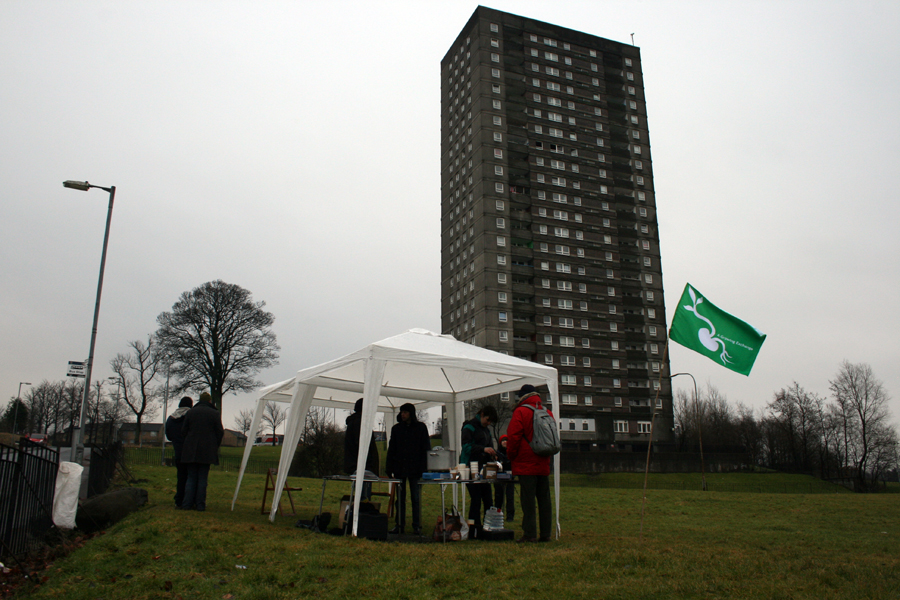 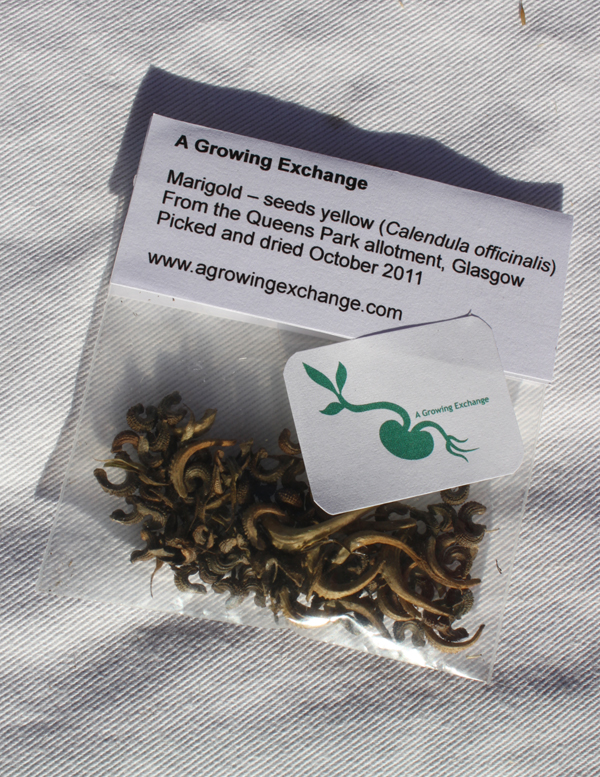 Alex Wilde, A Growing Exchange, 2011
Seeds picked and packaged in Glasgow in return for seeds brought over from the Hague. Credit: Alex Wilde and Annechien Meier

In 'A Growing Exchange' (2011 – ongoing, The Hague NL / Glasgow UK, in collaboration with Annechien Meier), Wilde has been animating the moments of connection between people involved in 'growing' projects. She has been talking to people, asking them questions – difficult questions – about what they are doing and why, and about how the practices of growing might relate to the practices of art. She has been spending time with different groups, visiting their projects and having further conversations, this time with artist Annechien Meier, her collaborator on the project.

Trying to examine this work from the outside is difficult, as we are used to thinking about artists’ practices in terms of research to be followed by an outcome of some kind, or in terms of a process to be followed by a product. But Wilde’s work here does not allow us that luxury. She is uncompromising, refusing such previously assumed distinctions and disallowing any prior expectations about what might and might not be art. Why should there be a difference? Wilde asks us, implicitly. This is my practice. It is research and outcome, product and process together. And yet there are moments where the dialogue crystallises into a single gesture – a packet of seeds is exchanged between two cities, a shelter is built on a plot of land, a video records a conversation. Are these moments ‘artworks’ in any conventional sense? Yes, but they are also punctuation marks within a far more all-encompassing, challenging, and complex practice that is itself an artwork in the most holistic sense.

Similar points of punctuation, invisibility, and collaboration occur in other examples of Wilde’s work, notably 'Broth Mix' (various locations, 2007), and its later incarnation 'Stone Soup' (CCA Glasgow, 2009), and in 'A Fertile Ground' (Saint Andrews Museum, 2010). These works focus on the making and sharing of food and conversation, though again each blurs the usual artistic structures of authorship, research, and outcome.

'My practice' says Wilde 'is me. I define my self and, by doing that, I also define my work.' It's a challenging position to take, and one that plunges her into a continuing crisis of confrontation with the most essential languages of art and being. But the crisis remains an animated one, which continues to offer fertility, growth, and sustenance as well as challenge.

Alex Wilde is a visual artist based in Glasgow. Born in Sheffield, Alex studied at the Leeds College of Art and Design in 1997/98 and then The Glasgow School of Art. She graduated in 2001 from the Environmental Art department, from which her interest in the relationship between art, public space and community stems. Since graduating, Alex has been involved in creative projects across Scotland with a variety of groups in different settings.

Key projects since graduating include 'Broth Mix', a collaborative project with Leigh French in the Intermedia Gallery, CCA, Glasgow in 2007, 'A Fertile Ground', commissioned by Fife Contemporary Art and Craft in 2010 and 'A Growing Exchange', a collaborative project supported by the CCA in Glasgow and Stroom in The Hague, started in 2011. She also currently works with Artlink Edinburgh managing the 'Growing Spaces' project at the Royal Edinburgh Hospital and on creative projects with the Govanhill Baths Community Trust and Streetland, Govanhill.

Barker presents the gesture of retelling as a way to explore the fundamentals of the human condition. By remaking these stories (in art, in life, in contemporary culture) we influence as well as describe our knowledge of self and imagination. Barker re-voices these myths as an artist, as a woman, and as an individual. By doing so she repositions their imagery through an inescapably contemporary lens - relating ideas of narrative structure, repetition and metamorphosis, to the vivid quality of the live, present, female artist. The re-making of the mythic space of performance becomes a gesture towards the ritual and/or artistic understanding of self, gender, and mortality.

Barker's works are recited (sung, incanted, spoken, and invoked) from memory before a live audience. The act of performance is ritualised; emotionally loaded and affecting, and reliant on a concentrated focus that becomes by turns hypnotic, claustrophobic, and cathartic. Barker often works with fashion designer Lesley Hepburn, from whom she commissions handmade, bespoke garments, to be worn during performances.

Ruth Barker was born in 1979 in Leeds, and currently lives and works in Glasgow. She completed a first class BA (Hons) in Environmental Art at Glasgow School of Art in 2001, and an MFA at GSA in 2004. She is currently undertaking a practice-based PhD at Newcastle University, and has recently shown in the UK, Athens, Dublin, Rotterdam, Tel Aviv, and New York.