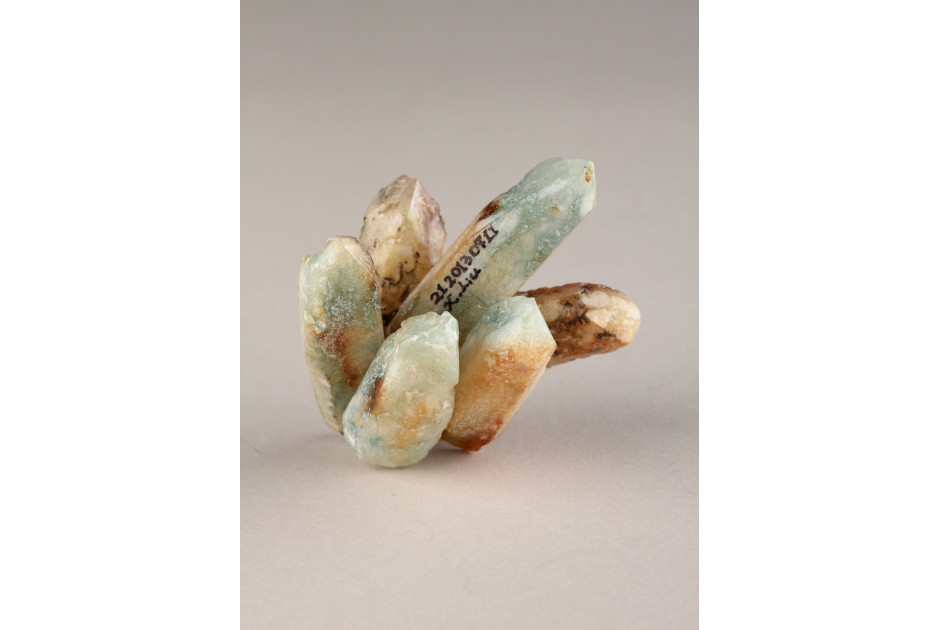 The MA in Jewellery, Silversmithing and Related Products at Birmingham’s School of Jewellery is renowned for the quality of work produced and diversity of materials utilised by students. As Course Director Professor Jivan Astfalck states, 'The variety of materials, manufacturing techniques and processes available to an artist or designer…is far larger and of much greater potential than is indicated by the term 'jewellery and silversmithing.'' The course successfully challenges preconceptions of what constitutes jewellery and adornment in addition to assumptions regarding the value of non-precious materials. Xiao Liu’s work is no exception.

Xiao Liu's display consisted of two projects, but his range of 'Rice Stone' brooches attracted me the most. The pieces, fairly average in size but protruding from their plinth, appear mineral-based. They look like elements emerging from natural rock, almost prehistoric in appearance. Arranged in a circular display, they put one in mind of monolithic stones or ritual practices.

On closer inspection one notices a hand-written code on each piece, like a museum collection number. This adds to the antiquated appearance of the work, as if to indicate provenance rather than age. The material choice is intriguing. His brooches may appear to a casual observer rather coarse aesthetically as if they have been fashioned from minerals. But the subtle colours and forms draw one in. 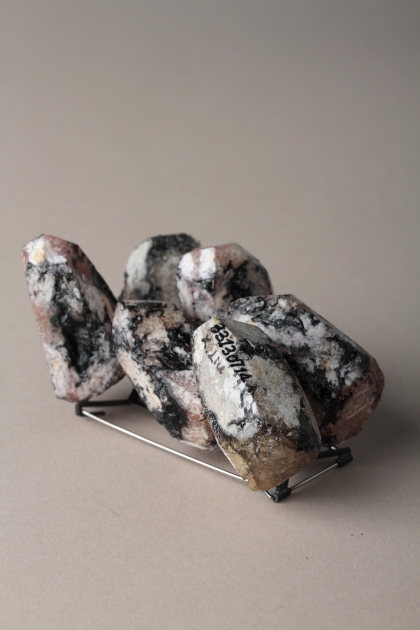 The brooches are made from a mixture of rice and dust, a material Xiao Liu has invented and developed himself. On discovering this, the viewer sees these brooches in a new light. What is seen conflicts with what is known. Xiao Liu is inspired by '…ritualistic forms of the prehistoric age… The 'Rice Stone' is intended to represent this original spiritual force, which is rough and dynamic.' This certainly comes through in the forms and colouring.

The codes are an archaeological reference, related to excavated artefacts, which create a link to when and where the stone was made with the artist’s signature 'X.Liu'. Collecting dust from his everyday life, Xiao Liu mixes it with boiled rice. Once the new material is prepared he adopts stone-cutting techniques to shape and polish the stones. As with stone-working, this brings out the structure of the material.

Although his brooches appear robust, the material cracks and melts if left outside and subjected to natural forces and all that remains is the brooch pin and remnants of rice. Observing and recording the ephemeral nature of his work is another element of Xiao Liu’s practice.

What's really exciting about Xiao Liu’s work in this course that pioneers the use of unusual materials is the creation of his own material: he’s gone a step further than most. He has experimented and tested, achieving attractive results with a variety of subtle colouring and quality of finish. The outcome is a range of brooches that are accessible and have a strong narrative. I feel there is great value in a personally devised material which could be shared with other disciplines and sectors.

Emma Daker is currently Exhibitions and Project Development Manager for Craftspace, a leading crafts development organisation based in Birmingham. The organisation initiates creative and public engagement programmes which stimulate critical enquiry, thinking, curiosity and understanding of contemporary making. It does this through touring exhibitions, socially engaged creative interventions, participatory projects, action research and consultancy. Emma’s most recent project is Made in the Middle, an open exhibition of contemporary craft, developed in partnership with mac birmingham and the National Centre for Craft and Design, which toured the country until July this year. Previously Emma was Contemporary Craft Curator at Bilston Craft Gallery in Wolverhampton.  Emma also acts as Museum Mentor to the Lace Guild Museum in Stourbridge.