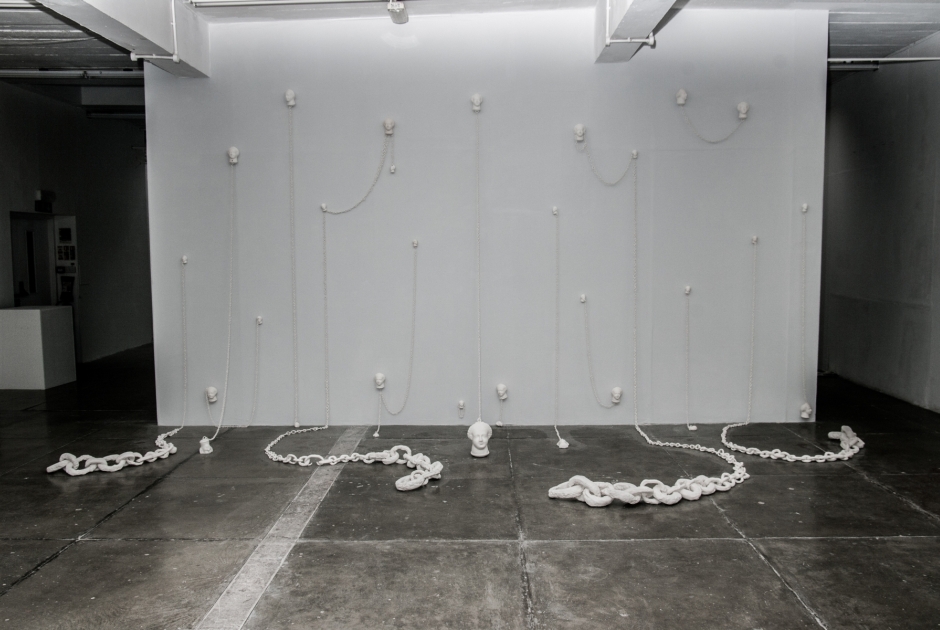 Sarah Younan has just begun a practice-based PhD at Cardiff School of Art and Design. She says that working within an academic institution allows her to experiment with cutting-edge processes, equipment and technologies.

Younan’s practice is as diverse as her background. Of German-Lebanese heritage, she grew up in South Germany and Kenya, returning to Germany to work in stage design and restoration before beginning her studies in Fine Art in the Netherlands. As well as creating objects she makes performances and films, linked together by common threads of interest.

Through WIRAD (Welsh Institute for Research in Art and Design) Younan was given access to 3D scanning and printing technologies. She had seen other artworks made with these processes and was aware of the risk of being seduced by the technology away from the creation of meaning. So she looked for a practical application: “I was looking for purpose”, she said.

Younan found this purpose at the National Museum of Wales. She was able to access their ceramics storage depot in Nantgarw, in a valley above Cardiff. The scanners offered up new possibilities for working with fragile museum objects. Through her previous museum restoration work she was aware of handling restrictions. In a storage shelf she found a little bonbonnière – a ceramic box in the shape of a woman’s head, decorated, lips passively loose, designed to lie on its side, or fit in a pocket to dispense sweets. In the same store, on the same shelf, sat a plate featuring a gentleman riding into battle on horseback - proud, purposeful, and dominating. 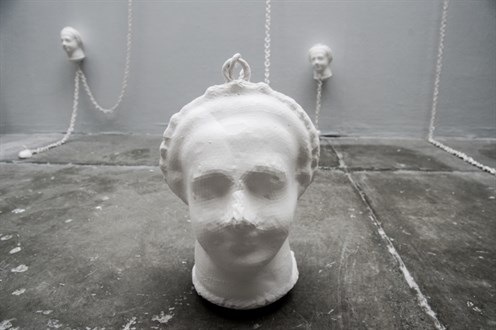 This accidental conjunction-by-storage set off a series of ideas that propelled Younan further along on an investigative journey charting ideas of femininity, of the small-scale, sometimes overlooked object, which is often treated as less important because of its associations with domesticity and feminine use.

To understand a little of what she thinks about these things it helps to see some of her peformance work.

Younan scanned, re-scaled and 3D printed the bonbonnière. The re-scaling of the scanned object left traces of the digital wireframe - a kind of pixilation, which gives the re-scaled bonbonnières a new surface and re-individualises each version. Younan went on to make slip casts of the printed heads, leaving slip residue to preserve traces of the making process.

The final work does not speak solely about the technologies and processes involved. Younan's installation weaves different scale bonbonnières and hand built ceramic chains into an intriguing net. On entering the main installation the viewer passes another element - a dark mirror almost – with the head at its centre and repeated around its edge, finally upright and looking out. Engaging.

Emma Geliot was senior visual arts officer for the Arts Council of Wales for over seven years until 2009. Prior to that she had been: director of the artists’ residencies programme for Cywaith Cymru . Artworks Wales; commissions manager for the National Cycle Network in Wales and had run a sculpture park and an arts centre, along with a number of project management, curatorial and research roles. But, having spent over 20 years in arts administration, in 2009 she re-trained as a journalist at Cardiff School of Journalism, qualifying in 2010. She is currently deputy editor for blown magazine and a freelance writer and journalist, writing about the contemporary visual arts in Wales and for various journals, publications and web sites.