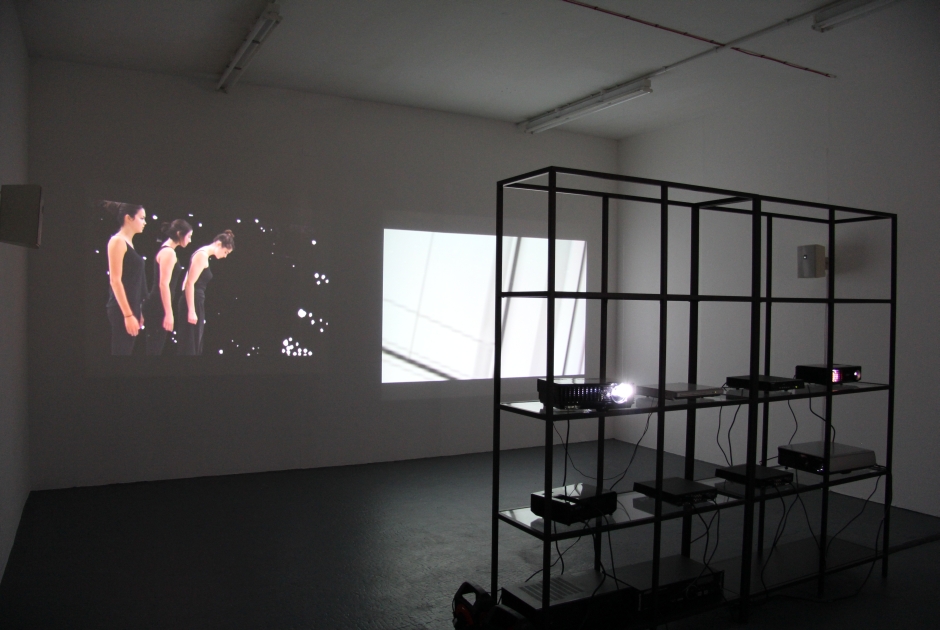 I was lured into Rosie Farrell’s installation at Chelsea via a cascading and haunting soundtrack permeating the entire space: Farrell’s stretched and slowed-down excerpt from Clint Mansell’s 'Requiem for a Dream' had a paralysing effect, in turn melancholic yet utterly compelling.

An open black steel shelving system in the centre of the space presented the technology fuelling the projections and audio, providing the sculptural anchor within the installation and revealing the mechanics at play. It reminded me of the scene in The Wizard of Oz when, upon their return to the Wizard's chamber, Toto opens a curtain revealing the Wizard to be an ordinary man, who apologetically explains that Dorothy's companions already possess what they have been seeking all along.

The black shelving system formed a transparent modernist grid, framing a non-linear narrative played out across the four films. One of the films neatly referenced Trisha Brown and Merce Cunningham: three choreographed dancers each executing absurd mechanical movements, as if they were a technological device or a cult performing some kind of ritual. The dancers were set against a backdrop of deep space (or the void that exists between celestial bodies), which was actually an animation of photocopied dust.

On the screen projected next to the dancers an orbiting photocopier becomes a bygone spaceship, a relic from the past, seemingly searching for originality. 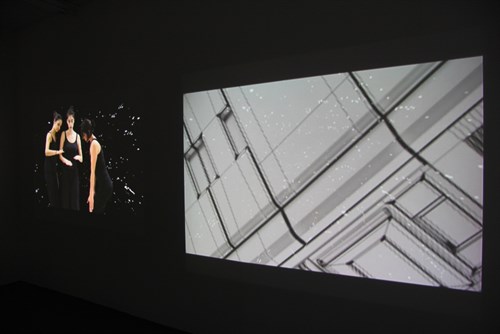 A third screen weaves together Maurice Blanchot’s vision of the everyday depicted through sign language, set against a series of ‘tricks’ drawn from Richard Wiseman’s book Quirkology, and his research into deception and the psychology of illusion, focusing on the techniques used by professional magicians.

The fourth film presented YouTube footage of the recent riots and subsequent looting of electronic stores, projected through a crystal sphere, resulting in a rainbow-edged, fractured multiplicity of images.

This shimmering mirage is a key to Farrell’s interest in the unreliability of the image and narrative and the simultaneous richness and meaninglessness of in-between states. A forensic unpicking of language, a deft reveal of the edit, a highlighting of the margins and a tickling the juicy underbelly of inanimate objects all play out quietly but captivatingly in this work.

She invites us to reflect on the perils of capitalism and desire and upon how we are navigating the everyday and technological progress.

Initially trained as an artist, Ceri Hand draws on over twenty years in the art world, having previously acted as Director of Metal (Liverpool), Director of Exhibitions, FACT (Liverpool, where she was a contributing curator to Liverpool Biennial in 2004 and 2006), Deputy Director of Grizedale Arts, Cumbria and Director of Make, London. Exhibitions curated during the Liverpool period include artists Yang Fudong, Jill Magid, Vito Acconci, Chen Chieh-jen, Walid Raad/The Atlas Group, Christian Jankowski, Matthew Buckingham, and The Black Audio Film Collective.

She has been on the boards of a number of organisations in the UK (including Eastside Projects, Open Eye Gallery and Tate Members Committee) and a judge for numerous panels. She will be a selector for the Creekside Open in 2013.

Gallery Background Information
Ceri Hand Gallery was founded in Liverpool in 2008 by Ceri Hand and relocated to London in July 2012.

The gallery has a special focus on conceptual and performance art, producing and exhibiting major new works on and offsite, including publications, editions and multiples.

Fostering relationships between gallery artists and their work provides a strong peer support for artist’s development and engaging curators and collectors.

The gallery has actively contributed to developing a regional market in the UK through local, national and international activity and a challenging programme of exhibitions and education events.

The gallery and artists receive regular reviews in international critical contexts, including Art Review, Frieze, Art Monthly, The Guardian, The Observer and The Art Newspaper.