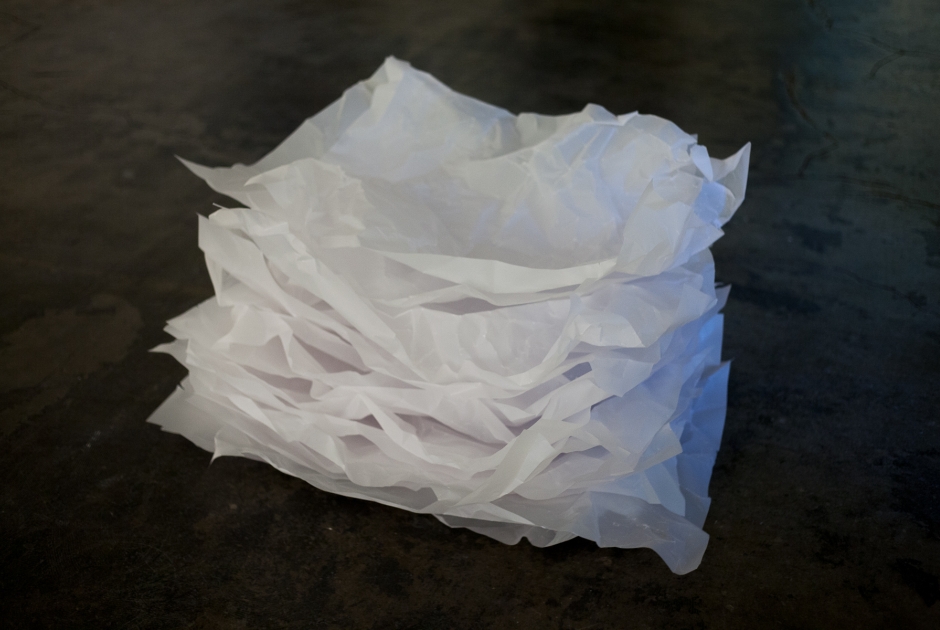 Annie Ravazzolo uses overlooked, everyday materials and objects to explore forces such as magnetism and gravity. She works quickly, taking the material as a starting point for an investigation into its properties, without knowing where it will lead. The end result is often ephemeral and precarious, yet consistently beautiful and conceptually rigorous.

In 'Pile of Tracing Paper' (2012), flat sheets of paper are transformed into a three-dimensional installation. Starting with one crumpled piece on the floor, Ravazzolo places another on top, continuing until one overbalances and succumbs to gravity, at which point she places the next on top of the fallen piece. At the end of the action, there is a pile from the floor to as far as she can reach, which continues to fall and re-form after the artist has ‘finished’, as the crushed paper releases the potential energy stored within and slightly opens out. The installation, presented in the MA exhibition at BALTIC39 within a small triangular room off the main gallery, could almost be mistaken for rejects, with the crumpled ball of paper being a signifier of artistic frustration: screw it up and start again. However, the uniformity and cleanness of the paper reveals deliberateness. The work achieves a beauty that surpasses the paucity of materials by being backlit with shifting natural light from a large window, which the translucent paper allows through. 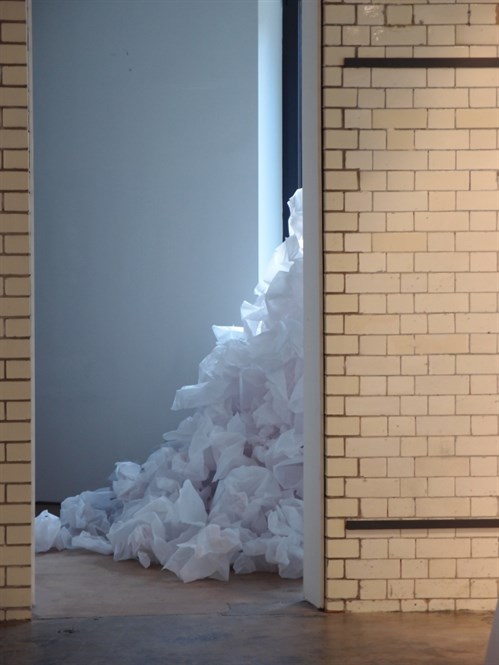 Light is an important element in 'Magnets III' (2012). A reflected spotlight glints off copper electrical wires hanging from an iron beam, down to the floor. Some are taut and others hang more loosely, disclosing the memory of when they were wound on a reel. All are kept in place by magnets. The taut wires are additionally disrupted at mid-points by double magnets, so that wires above and below are held in perfect tension between attraction and repulsion, with magical empty space between. As with the previous piece, the work continues to evolve after ‘completion’ as magnets occasionally snap together, reminding the viewer that the tension of the force is constant and powerful.

Tension is at the heart of the looped 3-minute DVD, 'Hula Hooping' (2012). Using a homemade, blue hula hoop (plumber’s irrigation piping and connector) we see the artist, from the neck down only and dressed in black, pick up the hoop, put one foot forward, and commence the action of swinging her hips to keep the circle in position. The work draws to mind Christian Jankowski’s rooftop hula hoop videos , 2007-8, which themselves reference Trisha Brown’s 'Roof Piece' of 1973. But without the distraction of a cityscape backdrop, Ravazzolo’s single-take action is more of an instructive ‘how to’ film, which focuses on the tension between motion and gravity. As time ticks by, the climax becomes ever more anticipated – the inevitable moment when the ring will drop to the floor. This piece is a continuation of an investigation in circles, seen in her earlier 'Nest of Straws' (2011) and 'Circles (Tracing Paper)' (2011). Other works, along with Ravazzolo’s thoughts and processes, are well documented on her excellent blog, which also links to the visual artists who inspire and excite her – Anna Barriball, Tom Friedman, Pe Lang, Richard Tuttle among others – to place her work within a broader context of contemporary practice.

Rebecca Morrill is a curator and writer based in Gateshead. She was worked since 2010 as Head of Collector Development, North East, for the Contemporary Art Society. She was Producer for AV Festival 10 & 12, (international biennial of visual art, music and moving image that takes place across Newcastle, Gateshead, Sunderland and Middlesbrough). She is also a contributor to the online contemporary art magazine This is Tomorrow. She is a Trustee of Bupa Great North Run Culture and one of the curatorial Advisory Panel for CIRCA Projects.

Morrill previously worked for five years at the Serpentine Gallery, London. As Exhibition Curator, she co-curated, with the Directors, exhibitions including Indian Highway, Gerhard Richter, Maria Lassnig, Anthony McCall and Damien Hirst's murderme collection and oversaw the editing and production of the catalogues accompanying these shows. She was also Project Organiser on three Serpentine Pavilion annual architecture commissions.

Prior to the Serpentine, she had roles in both the Exhibitions and Communications departments at Whitechapel Gallery, London, from 1999 to 2004, which included as Exhibition Organiser for Paul Noble, Franz West, Cristina Iglesias and Rodney Graham. She also launched and managed for six years the first website for the Whitechapel.