Online exhibitions of selected work by artists on Axisweb 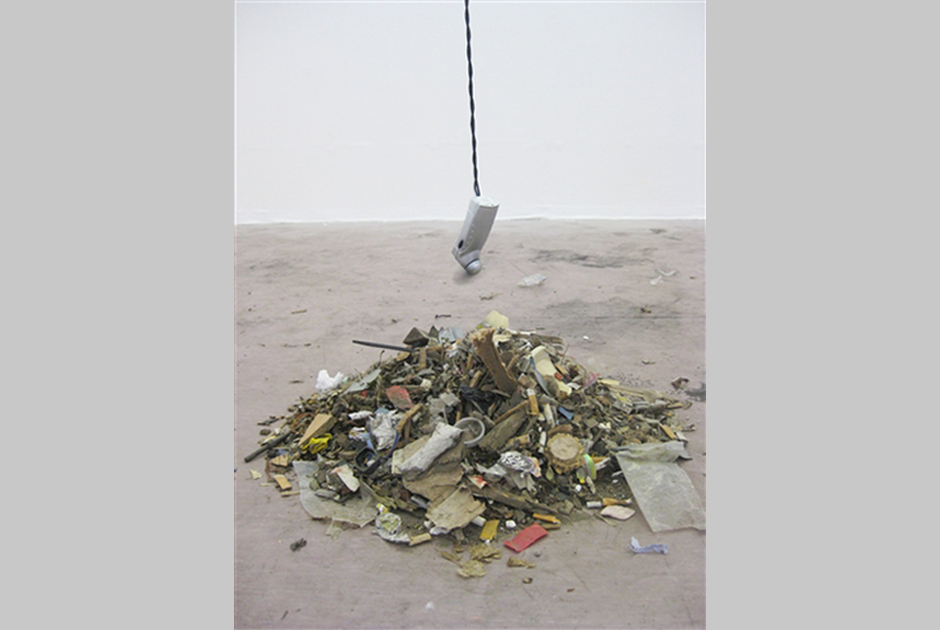 Alice Bradshaw, an MA student at the University of Huddersfield, selects works from Axisweb which use 'rubbish', and examines the processes and terminologies used by artists in the context of anthropological and socio-economic theories of rubbish.

This Curated Selection focuses on artists’ use of rubbish / waste / discards in their practices. I am examining the various materials, processes and terminologies artists employ across disciplines in the context of related anthropological and socio-economic theories of rubbish.

Rubbish is a human construct: no object or material is intrinsically rubbish. The perception of what constitutes rubbish is constantly in a state of flux and dependent on varying cultural values. Human life produces waste that becomes a signifier, even a memento and souvenir of human experience. But waste is also subversive in its formless (informe) and chaotic manifestations, and represents disease and death. Waste is the dark and dirty, hidden or ignored, side of humanity and is also increasing exponentially. Industrialisation and consumerism have produced unprecedented quantities of rubbish and waste is now a major global ecological concern. Reduce, recycle, reuse are the mantras for a more sustainable and safe planet. However this is in fierce opposition to capitalism.

Artists use discarded objects and materials in their practices for various reasons: the availability and negligible cost of used commodities may be a pragmatic consideration, or the materiality of discards may be a primary concern, and using personal rubbish can bring an autobiographical dimension to the work. The found object (objet trouvé) is a common feature in historical and contemporary practice and can often be defined as rubbish, although not automatically synonymous with it. Rubbish has a certain degree of space and time specificity and artists can make use of these characteristics to draw upon or to create specific narratives. 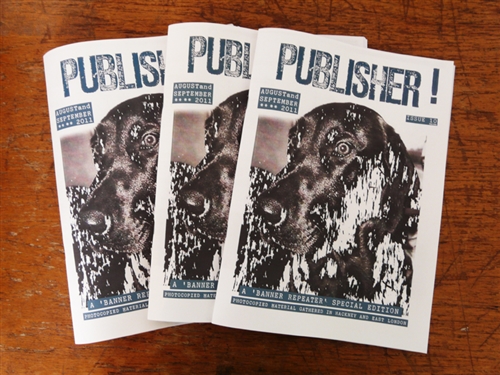 Maurice Carlin collects discarded photocopies left behind at local copy shops which he then collates, reprints and distributes as the periodical entitled 'The Self Publisher'. He publishes everything he collects within specific time-frames and locations, negating content hierarchies as he maps the leftover literary and visual ephemera of anonymous situations.

Carlin tries to keep editorial intervention to a minimum and re-publishes content as he finds it. The back stories of why each photocopy has been made and then discarded is unknown and for the reader to speculate upon, enticed by the process of making connections between articles the artist has happened to find.

Carlin disrupts the waste stream of these everyday contexts, making public the otherwise 'diminished usefulness of each discarded copy', and gives new meaning and value to an array of cheaply reproduced articles, texts, adverts and signs. 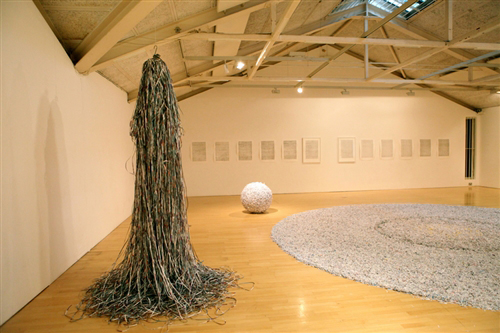 ‘Ubiquitous Materials' (2012) by Jeannie Driver consists of shredded publicity materials for the exhibition at South Hill Park, Bracknell, where the work was first shown.

A3 folded flyers were cut to A5, shredded, then reassembled into 10-metre lengths and suspended from a steel S hook. Driver often works with waste paper and is particularly interested in the shredding process. She mainly uses security level 2 and 3 shredders, at 6mm and 2mm respectively, the latter used for confidential documents. The process of rendering publicity materials unreadable is counter-productive and poetically absurd. Shredding destroys the publicity material's function but leaves fragments of evidence of its former life.

‘Surplus Remains’ comments on the exhibition turnover of gallery spaces and the ubiquity of the white cube presented anew with each exhibition. Here, Driver turns the gallery's history into three-dimensional form, suspending it in the physical space and in time, as a snapshot of the period which preceded it. 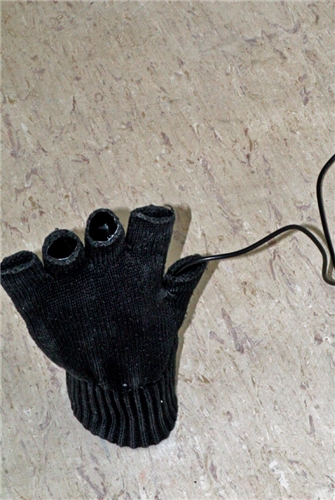 Livia Garcia's ‘Once Lost’ (2008-2009) is a fingerless glove embedded within a video showing a single roaming eye looking up at the viewer through the finger holes.

When Garcia first arrived in the UK she collected a number of lost objects found on her daily wanderings in her new surroundings. The loneliness Garcia projects onto this inanimate object is humanised through the presence of the active eye in the video.

The singularity of the eye mirrors that of the glove and in doing so emphasises the absence of the (lost) other. Garcia uses playful, theatrical devices to lure the viewer into a world of lost and found identities.

Hilary Jack often uses broken and found objects in her work. She draws upon the social history of the objects she collects from eBay, charity shops and the streets, making new connections and narratives by assembling discarded, abandoned materials.

In ‘Endangered Species’ (2011), Jack supplants a bird's head on to a headless figurine - a recurring motif in her recent works - which sits atop a mossy log. The resultant anthropomorphic character is an uncanny hybrid creature, recognisable only from its constituent parts.

Kitsch figurines and taxidermy animals that were once commonplace features of the household are now almost worthless in popular culture and not deemed worthy of the museum. Jack uses the lowly status of these readily-available materials to create a new, unique species of object, making the subtle anti-consumerist statement that we discard too many objects that could be repaired or reused. 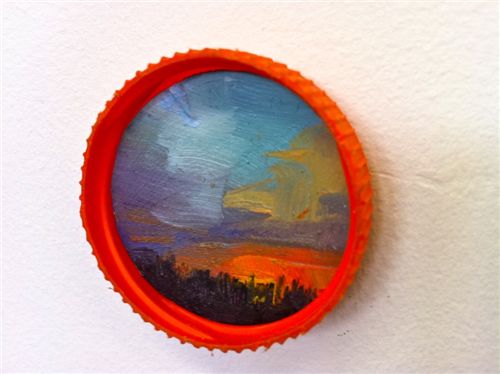 Gremzde has collected hundreds of lids and each landscape is a miniature window on to an unidentified world, perhaps a place the artist calls home, or somewhere symbolic of the ubiquitous countryside.

The work reminds us of the ecosystems which function to produce the milk for which these lids packaged. The circular lids are also suggestive of Petri dishes which cultivate life and signify the extent to which agriculture has been divorced from the trees and fields depicted in the paintings.

‘Small World’ is a small yet poignant reminder of how every bit of rubbish impacts on the world, as each piece Gremzde saves from landfill is transformed into a miniature utopia. 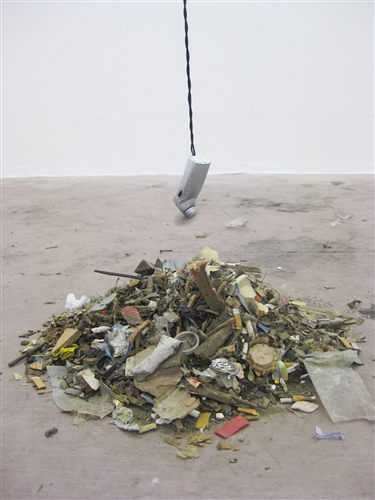 Louise Winter uses rubbish to explore notions of ‘site’ and ‘non-site’. She collects her materials from marginal places such as abandoned collieries, quarries and derelict buildings, and recontextualises them in the gallery space, via her studio, where they undergo a playful transformation.

For Winter, it is important to work with already existing matter rather than create new objects. In the recent work ‘Rubbish Pile and Fan’ (2012), she attempts to reanimate found materials with a small hand-held electric fan suspended above a pile of rubbish. The still rubbish remains static, refusing to be moved by the fan, which is more effective in making sound than in moving the mass of rubbish.

This futile gesture emulates the insignificant impact of removing such a small amount of rubbish from the environment, thus drawing attention to the physical weight and permanence of these discarded materials.

From utilising context-specific waste paper (Carlin and Driver) to discovering anthropomorphic characteristics in found objects (Garcia and Jack), using a particular discarded plastic item as repeated form (Gremzde) or rubbish in all its variety and formlessness (Winter), each work here demonstrates a desire to use what already exists in the world in the making of art objects.

Whilst the artists clearly acknowledge that these small yet political acts of salvaging are insignificant in the scale of society's waste problem, the statements they make remind us not just about the problem, but also about the very nature of waste itself and our individual relationship to it.

Alice Bradshaw is an artist, curator, researcher and writer based in West Yorkshire. Her current MA by Research at the University of Huddersfield is studying rubbish in artists' practices.

Rubbish is the third in our Curated Selection Prize series, curated by Alice Bradshaw , MA by Research, University of Huddersfield.