The Artist of the Month for March, Joe Fletcher Orr, tells us about setting up an art space in Liverpool and how he gets inspiration while in the bath

Lesley Guy: Describe your work. Is there a particular piece you’ve made that represents a turning point in your practice?

Joe Fletcher Orr: The work I’m making at the moment is constantly changing and I’m trying to keep it this way intentionally so that nobody can pin me down to one specific field of interest or medium. There's usually a humorous element to the work or something so serious that it’s funny.

When I was younger, my dad would take me to galleries with the sole purpose of having a laugh at contemporary art. Part of what made this experience funny was discussing how much money the work was worth. The transition of a work from the studio to the gallery to the collector's wall is something I’m really interesting in playing with.

I made a work called ‘Streaker’ were I stood up against a wall in the gallery and the curator/gallerist gave me a spray tan leaving a caricature outline on the wall behind. I guess this was poking fun at the self-importance of the contemporary art world.

The most recent work I’ve made is ‘The Game’, which is a football that was signed by all of the artists in a show I was in called SMALL Rome, curated by Adam Carr. There were some famous artists in the show, so by getting them to sign a ball the value of my work would be much higher than usual. The work sold, so I guess it kind of worked!

LG: How much time do you spend in the studio? Are you disciplined?

JFO: I guess an easy answer to this is no, I’m not disciplined and I don't spend as much time in the studio as I’d like to. I’ve decided that as an emerging artist a traditional studio is way too cold and dusty for me, so I am going to eventually move out and get a membership at a luxury spa were I will spend my time in a relaxation pool. This sounds completely ridiculous but I get most of my ideas whilst I'm in the bath, so it makes perfect sense for my own practice. 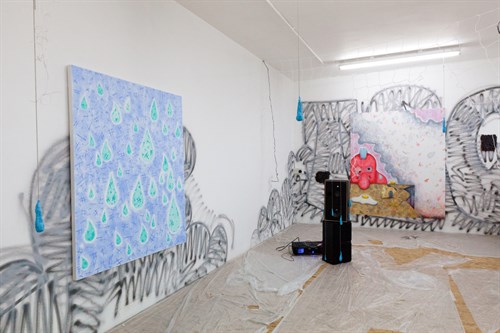 LG: Tell me about Cactus. How did that come about?

JFO: I was moving back to Liverpool and realised that there is a real lack of galleries/project spaces working with emerging and mid-career artists. There is a very top heavy art scene with lots of public galleries such as Tate Liverpool, the Bluecoat and the Walker Art Gallery, but very few underground or new spaces. So I decided to open up Cactus just after I finished my BA in Manchester.

I joined The Royal Standard as a studio holder and just as I was joining, they decided to double in size by taking on another building just across the car park. I proposed to them the idea of opening a space within their new building and they were really welcoming of this. It’s been the home for Cactus ever since.

LG: Is there anyone who has been particularly influential - either on your work or your career?

JFO: I’m very conscious of this sounding like a drunk acceptance speech after receiving an Oscar… anyway, there are lots of people who have given me a massive amount of support. I had a really good time on my degree in Manchester and the tutors still support me now even though I’m not a student any more.

Since then The International 3 have started representing me and they've also offered me much-needed support. Having somebody to discuss your work with whenever you want and getting regular critical feedback is very useful.

LG: You only graduated last year. What’s kept you going in that difficult time after graduating?

JFO: I think opening a space kept me going and those four months of sprucing the space up kept me very busy because I wasn’t really making any work when I finished. The transition is much more difficult than you imagine. For me it was really important that I got a studio sorted out for when I graduated because, even though I wasn’t in there every day, I still convinced myself that I was an artist by having a studio.