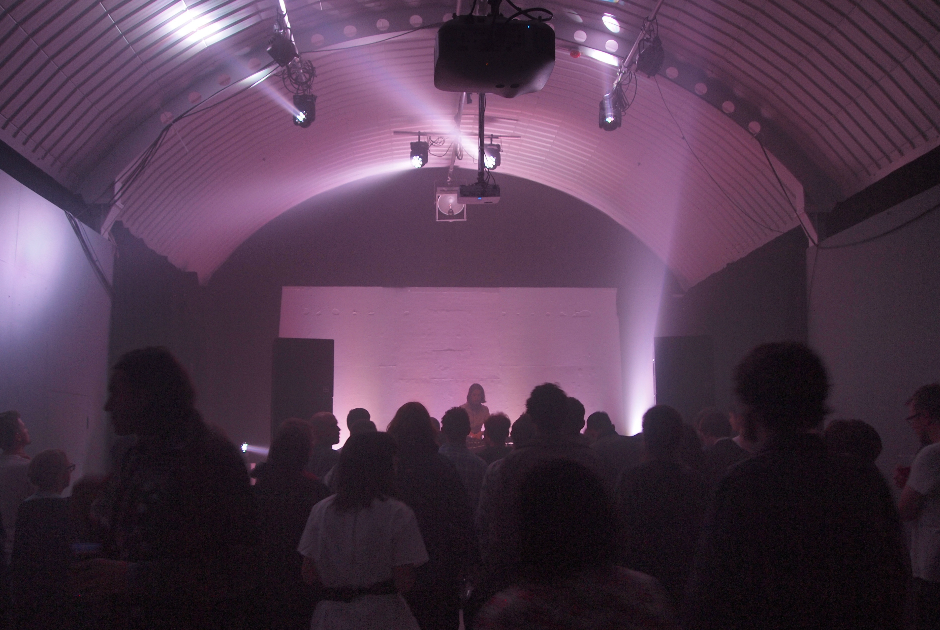 Helena Hauff headlining the evening on the Gallery Stage

Last Saturday I headed down to Wysing Arts Centre in Cambridgeshire for their fifth annual music festival, Space Time: The Future, a one day event, with acts starting at midday and ending sometime after midnight, with a focus on women in experimental music.

Tucked in amongst the permanent gallery and studio buildings on the verdant Wysing site an array of stages and screening rooms promised an exciting spread of music and audio works throughout the day. There was a marquee with stalls by artist led spaces, publishers and galleries from across the country selling editions and works by artists. Arcadia Missa and Pro/Numb from London, Trade and Primary from Nottingham and Outpost from Norwich were present amongst others. I was there representing Mexico, an artist group I run with a couple of friends in Leeds. 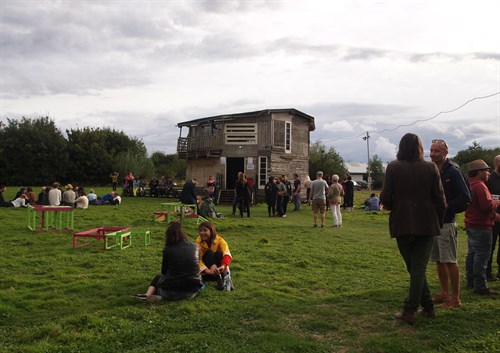 Enjoying some sun outside The Amphis Stage

In the larger field at the back was the Amphis stage which is built entirely from reclaimed wood, doors and windows. Complete with a mezzanine level and accommodating dancefloor, it allowed the audience to be part of the performance. No watching the bands on a screen half a kilometre away here.

The first act I saw was Hannah Sawtell. It was 4.15pm, outside the sun was shining, birds were cheeping and grasshoppers creaking, but inside the gallery stage Sawtell’s stunning performance, entirely lit by strobe, was a blizzard of electronic noise and light. It felt like less of a warm up, and more like shock treatment.

Rachel MacLean’s Over The Rainbow also left me feeling a little shaken, or at least unnerved. The work depicts young girls being whisked off through a world of Disney-baroque architecture, magical powers and ghostly strangers. The actors are dubbed over with voices from old Hollywood films and perfume adverts, and the backdrop digitally added by green screen. 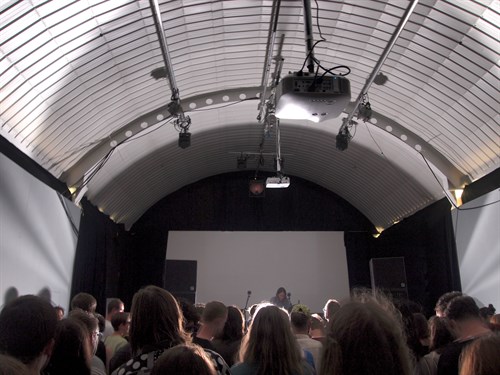 Hannah Sawtell on the Gallery Stage

I find music and sound art are often shown slightly awkwardly in a gallery context. It can take time and a degree of trust to ‘get into’ audio works or music, something which standing in a white cube with headphones on, or listening to a DJ playing music turned down enough to talk over doesn’t really encourage. At Space Time: The Future the sound systems were all incredibly clear and could be crushingly loud without any fuzz or crackle. Incidentally the site benefitted by being completely out of phone signal, which meant the audience spent very little time being #atthefestival and paid more attention to the acts. It doesn’t sound particularly rock’n’roll, but the fact that everything was kept on time with no sound bleed between stages and that numbers were kept fairly low (there were around 500 festival goers), showed how much respect the organisers had for all the artists and performers.

Later in the day, Gina Birch and Ana de Silva of seminal post-punk group The Raincoats played what was one of the most eagerly anticipated sets of the day, and it was no disappointment. They played a range of newer and older material, including some surprising appropriation of Dizzee Rascal lyrics. Finishing with their brilliant 'Looking at me'. 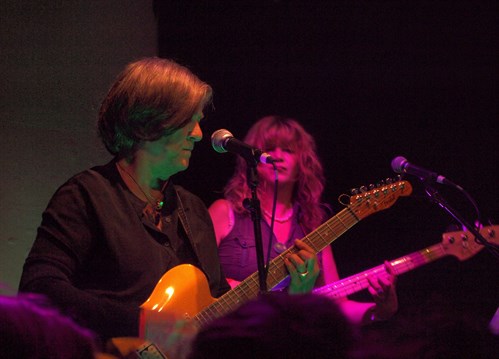 Artist Holly Herdon’s set, with visuals by collaborator Mat Dryden drenched us in twisted electronic whirls, thuds and popping vocals, stepping back and forth between choir music and danceable beats. Watching and listening to her perform really demonstrated how advances in the technology of instruments are changing the music created. Strumming, hitting and blowing have been replaced by swiping, clicking and scrolling, and this change can be heard in the types of sounds produced. The visuals started and ended by Dryden browsing and saving photos of people who were down as ‘attending’ on the festival’s Facebook page to his desktop, which was projected across the back gallery wall. It actually created more cheers and whoops than awkward embarrassment. 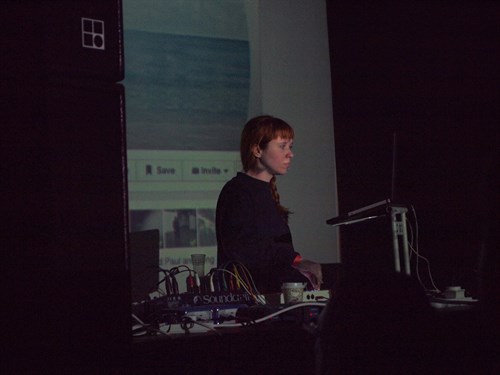 Golden Pudel resident DJ and artist on Werkdiscs label, Helena Hauff, finished the night with a flawless vinyl only DJ set. Her mix consisted of quite a dark selection of acid house and techno, but it soon had the whole room dancing.

There have been a few art exhibitions recently which associate themselves with music and its impact. This was an event which I feel really did the music itself justice: side-stepping pretence or nostalgia in favour of what felt like an ambitious and HD view of what the future might hopefully be like for experimental art and music.

Rant 61: Nightclub at the Museum >

An Interview with Supernormal Festival >