Putting the party into politics 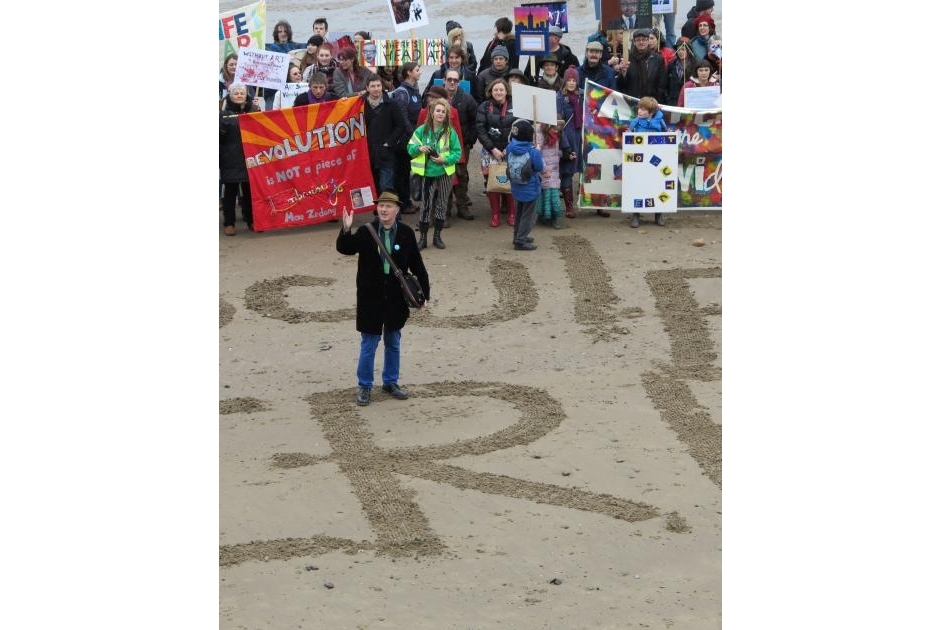 Our Director, Sheila McGregor, looks back at Bob and Roberta Smith's Art Party Conference in Scarborough on 23 November 2014

To anyone on the outside, the Art Party Conference 2013 must have seemed a pretty puzzling spectacle. The participants were determined to let their hair down, in the time-honoured tradition of British seaside excursions, with all manner of fancy dress and high jinx. But they were also deadly serious about getting their message across. “Art makes people powerful”, read one of the protestors’ banners.

I won’t easily forget the good-humoured procession on the beach, the WI-style atmosphere of madcap endeavour and the cleverly orchestrated central summit piled high with placards and pictures of Michael Gove, who wasn’t looking at his best. Even the stuffed fox on the stand next to ours (courtesy of Scarborough Museums Trust) appeared to be having a whale of a time.

The presence of high-profile artists such as Cornelia Parker, Richard Wentworth and Jeremy Deller lent the occasion a certain gravitas, though it was the collective show of creative might by artists from all over the country that really gave the event its energy.

For us it was a great opportunity to meet artists from our directory, including the ten artists to whom we had given travel bursaries, and to screen films by several of our members. Adam Goodge’s performance at our stall chimed brilliantly with the conference theme. How do we reconcile competing demands on our emotions, physical stamina and time? How do we balance work, life and art?

The larger question posed by the conference as a whole was about the place of art within our education system. It was hard at times to know who we were addressing, as there were no politicians in attendance and few so-called opinion-formers either.

But perhaps this was the right starting place: consensus, commitment and solidarity are the basis of any political movement. And, to use an appropriate metaphor, those things were present in buckets and spadefuls.

Art Party 2013 was more performance than conference. Bob and Roberta Smith and his collaborators will no doubt story-board the event to create campaign materials that capture the imagination and make a powerful case for the value of artists and art education.

At the same time, we must compel consideration and recognition of the ‘harder’ economic arguments that are (and always have been) part of the rationale for art and design education.

Without the visual imagination, we become less inventive. And, as the Art Party Conference reminded us, a great deal duller too.

Axisweb at the Art Party 2013
Extraordinary Change: what kind of change do we want?
Adam Goodge on Axisweb