Art of the possible: Artists' Union England puts politicans on the spot 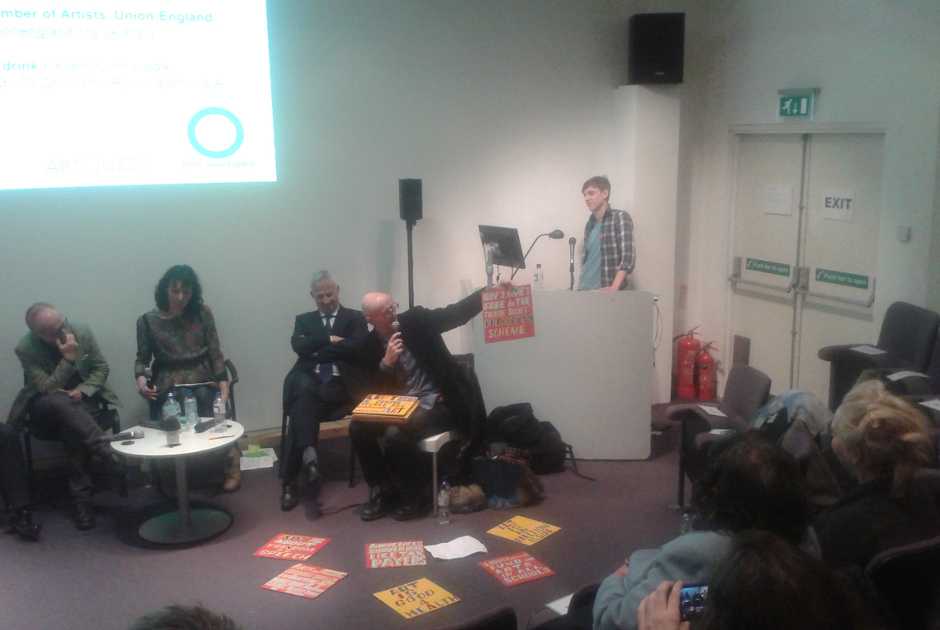 I’ve been to a good many hustings in my time, but seldom one as fast, furious and wide-ranging as the event organised by Artists’ Union England (AUE) last week. This was down to brisk but scrupulous chairing by Theresa Easton and a good spread of questions, which moved from discussion of the general context in which artists operate to the specific financial challenges they face in negotiating contracts, fees and an increasingly inflexible benefits system.

With the election less than three months away and the electoral situation more volatile than anyone can remember, the mood was pretty determined. It’s not often you get politicians from the major parties in one room. The unspoken consensus seemed to be: let’s see the whites of their eyes. I even felt a bit sorry for them.

There were the inevitable last-minute apologies. Arts Minister Ed Vaizey couldn’t be there because of a vital debate about fracking. His understudy was Damian Collins, Tory MP for Folkestone, who looked as if he’d rather be back in the artist-free zone of the House of Commons chamber.

Sure enough, he soon disappeared to do his duty in a vote about fracking, but not before he’d defended the government’s emphasis on philanthropic giving as a substitute for fair and proper funding of local authorities and the only option available in Austerity Britain. But he knew the Folkestone Triennial was a good thing, and it’s hard to disagree with that.

The Lib Dems were likewise fielding a substitute speaker, Baroness Jane Bonham-Carter having made her excuses. Mike Storey was a retired head teacher and former leader of Liverpool City Council, who knew a thing or two about culture-led regeneration and expressed strong support for the role of the arts in education. As the only person now left on the panel from a party in government, he took a good deal of flak, not least in connection with the Lib Dems’ broken promises on tuition fees.

Labour’s Chris Bryant didn’t have a particularly easy ride either. No, he couldn’t promise extra funding for the arts immediately, given the fiscal situation Labour is likely to inherit if it comes to power. But he did offer a fairer distribution of funding to local government and a rebalancing of the relationship between London and the regions. Where you stand on the latter issue probably depends on where you live. As far as I’m concerned, the facts and figures speak for themselves. But that is not a universally popular position.

Local authority funding is a separate question and reveals a considerable difference of approach between the main parties. Labour will restore the needs-based funding formula for local government so ruthlessly (and stealthily) scrapped by the coalition. And the Lib Dems say they will no longer penalise councils for raising the council tax, which has got to be good news.

Martin Dobson, the Green spokesperson, received a sympathetic hearing, despite or maybe because of the fact that he’s new to the job. He emphasised the Green Party’s anti-austerity credentials and offered a tempting vision of the future in which the state ensures that everybody pays their taxes, including big corporations, the minimum wage is raised to £10, we get rid of Trident and we all receive a citizen’s income of £72 per week, whether we need it or not.

There was plenty of common ground between the various spokespeople when it came to debating what happens to the arts in schools. This has been and remains the big crusade of artist and parliamentary candidate Bob and Roberta Smith, who is standing against Michael Gove in Surrey Heath. Whether or not he succeeds, his candidacy puts art education on the political agenda and reminds us all that the visual imagination is a resource we just can't live without.

But how you encourage good art teaching is another matter, especially in initial teacher training. There's also an inherent bias in careers advice against anything that is not vocational or appropriate to what teachers perceive to be your station in life. Hayley Hare, Vice Chair of AUE, made us all laugh when she said that she had been told at school that she had two career options: flower arranger or maker of false teeth.

Her story exemplifies a problem that is only going to get worse, with increasing emphasis on so-called STEM subjects and poorly informed careers advice. Tuition fees compound the situation, as art colleges fall over themselves to attract those who can afford to pay, especially for post-graduate qualifications.

Artists’ pay was, of course, the issue that everybody wanted to talk about, whether in relation to galleries not paying their workforce the living wage or artists being expected to work for nothing so much of the time. Universal credit is a further pressing problem, because it's not designed for freelance workers whose income fluctuates from month to month.

The National Gallery, currently in dispute with its own front-of-house workforce, came in for particular censure, with one member of the audience quite rightly deploring the absence of artists from its board.

Members of the panel offered a range of solutions, including enforcement of the minimum wage, a clamp-down on zero-hours contracts, better regulation of the private rental market, a more flexible approach to business rates and support for better contractual arrangements between artists and the people who employ them.

Who to believe? Well, that can only be for individuals to decide. People often say that politicians don't listen, but on this occasion they did so with (for the most part) good humour. This was the first time in living memory that artists have lobbied politicians so directly. I very much hope it won't be the last.

Find out more about the Artists' Union England here >