Art Party: GCSEs and the future of art education

With GCSE results looming on 21 August, young people (and their parents) all over the country are waiting anxiously to hear how they have done. It’s a tense and decisive time for any 16-year-old, a moment of choice that determines the next stage in their education and possibly the rest of their lives. But how many of them, I wonder, will choose to study Art, Craft and Design at A level? And how many more will then go on to art school?

Evidence assembled by the National Society for Education in Art and Design (NSEAD), as part of its annual survey of Art, Craft and Design Heads of Department and Educators, paints a depressing picture. Half of all schools surveyed said that art teaching has suffered as a result of the government’s focus on more ‘academic’ subjects. Many teachers reported that pupils in high ability sets are prevented from studying Art, Craft and Design at all.

Most shocking of all is the revelation that teachers in state schools are considerably more likely to record the downgrading of arts provision than their counterparts in the private sector, an anomaly that must surely give a government convinced of the superiority of private education pause for thought.

As many people involved with the visual arts can’t have failed to notice, GCSE results day also marks the launch of Bob and Roberta Smith’s road movie about last year’s Art Party Conference in Scarborough, an event which brought artists from all over the country together in a mass protest against the marginalisation of arts education under the then Secretary of State for Education, Michael Gove. 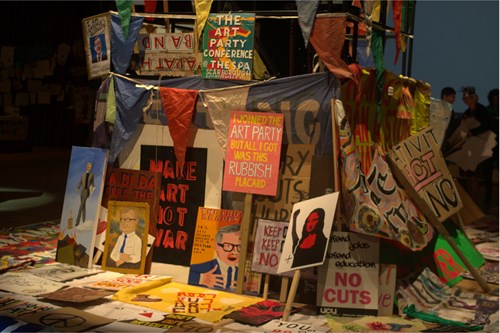 We were there, as were many of our members. And what an extraordinary manifestation it was. I’ll never forget that jolly march across the beach or the atmosphere of anarchic creativity that infused the whole occasion. It was really more a work of art than an event.

Much of our collective anger was directed against Michael Gove, hilariously impersonated at the Art Party Conference by John Voce. 'Churchill was a far better painter than Hitler ever was', he thundered. 'The last Department of Education spent a long time getting things wrong. Now they're going to get things right.' But now, in a twist of political fate, Gove has gone - side-lined as a liability by his party leader and superseded by the relatively unknown Nicky Morgan.

What does this mean for The Art Party and for the broader campaign to promote art education? Well, it certainly presents Bob and Roberta Smith with a certain PR difficulty: after all, the strapline for his film is 'How do you tell one man that he’s wrong?’. But this change of personnel (and gender) at the top of government seems unlikely to mark a radical shift in policy. For that reason, it's important that the arts community keeps up the pressure for change.

Quietly and persistently, many organisations are doing precisely that. In the run-up to next year’s general election, NSEAD is preparing to launch a Manifesto for Art, Craft and Design Education. The Cultural Learning Alliance remains a mine of useful policy evidence and advocacy information. And other organisations such as engage and the Crafts Council do a lot of patient lobbying behind-the-scenes.

Here’s hoping these campaigns have some effect, if not on the present government then on the opposition parties that may end up in power next year.

Meanwhile, If you’re on tenterhooks about those GCSE results, good luck! And if you'd like to attend the launch of Art Party, here's where it's being screened: cornerhouse.org/artist-film/artist-films/artparty/4

Sheila McGregor is the director of Axisweb

Find out more about her >

Putting the party into politics >

Extraordinary change: what kind of change do we want? >

Alec Clegg and the case for arts education >