Art in ‘the big society’ 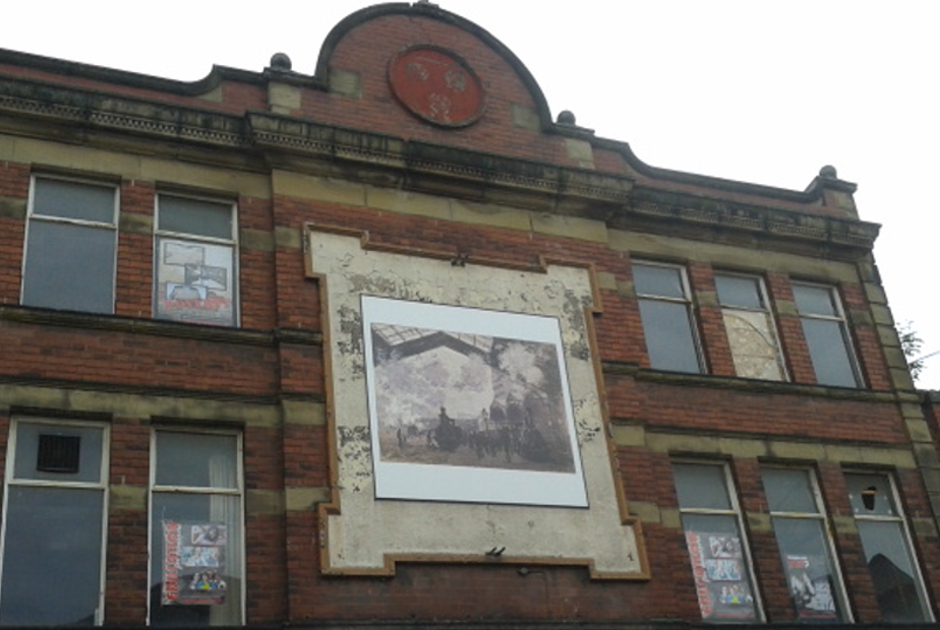 On a recent trip to Rotherham, Axisweb director Sheila McGregor encountered the incongruous Gallery Town, a series of artworks displayed on buildings across the town

This blog-post began in the streets of Rotherham, once a stronghold of the nation’s steel industry and more recently newsworthy as a UKIP conquest in May’s local elections.

On the hunt for lunch during a shopping expedition, I spotted a suitable café. But before I could get as far as my sandwich, a large picture on the wall directly opposite the entrance to the café stopped me in my tracks.

What was a reproduction of Lady Cockburn and her Three Eldest Sons (1773) by Sir Joshua Reynolds doing in this down-at-heel alleyway above a wheelie-bin? Who had put it there and why? 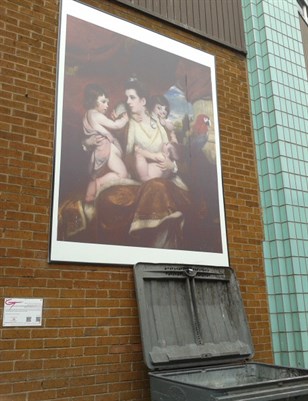 Sir Joshua Reynolds, Lady Cockburn and her three eldest sons, on display as part of Gallery Town in Rotherham

The accompanying label, with its high-minded focus on art historical sources, might have been written for the National Gallery in the 1950s. Closer inspection told me that this was part of a project called ‘Gallery Town’, an open-air art gallery brought to the people of Rotherham by a public-spirited group of local business people and council officers. And sure enough, there were plenty of other famous pictures scattered about the town-centre, from Seurat’s Bathers at Asnières (1884) to Monet’s The Gare St-Lazare (1877) - all competing for the attention of passers-by with an assortment of works by local artists and schools. 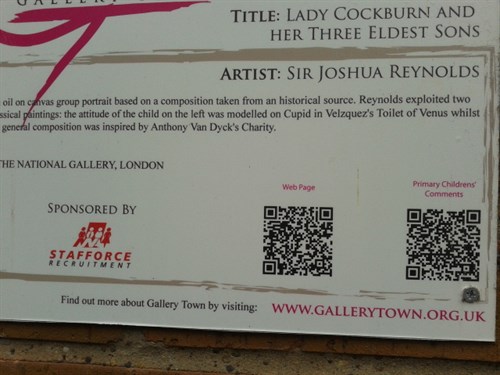 According to the website, “The idea came about due to a group of local business people working alongside the local strategic partnership and town centre team looking at ways to regenerate and encourage more shoppers and visitors into Rotherham, in order to drive the local economy”. No small ambition, then.

Why did such a self-evidently well-intentioned project make me so uneasy? Maybe it’s the unquestioning emphasis on a narrow canon of ‘famous’ artists, casually rubbing shoulders with the landscapes, lions and still lives beloved of local painters. Maybe it’s the belief that reproductions are any kind of substitute for the real thing. Maybe it’s the touching assumption that the mere presence of art in the public realm will rub off on people. Maybe it’s the perfectly obvious fact that nobody pays these things a blind bit of notice.

On the face of it, it’s precisely the kind of ‘big society’ intervention in civic life that the government is trying to encourage. But, for me, that’s just the problem. If this is the best that local businesses can do, it’s proof (if any were needed) that philanthropy will never make good the gaps opened up in cultural provision by years of economic decline and central government indifference.

Against the backdrop of ferocious cuts, forced on local authorities by a punitive reform of the formula for funding local government, the display of reproductions of ‘great’ paintings from the National Gallery or Musée d’Orsay is somehow beside the point.

No doubt Gallery Town seemed like a good idea at the time. Come to think of it, it’s really just a local version of Art Everywhere, which flooded Decaux poster sites with the nation’s ‘favourite’ works of art last summer and is about to do the same again.

But as local authorities are starved of funds, and museums, galleries and libraries up and down the country teeter on the verge of closure, is this really the best we can do? Why aren’t we getting more angry?

Sheila McGregor is the director of Axisweb

Find out more about her >

It's not fair: the London bias of arts funding >